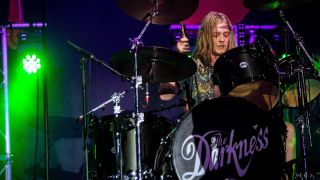 Last year, Rufus Taylor rorared back with a new Darkness album, a bunch of tasty drum moments and his faithful old kit. The sticksman fills us in...

You came into the band at the start of the touring cycle for the last album. Did having that time touring with the band help when it came to writing and recording Pinewood Smile?

“I think that played an integral part. There were a couple of nerve-wracking moments when I first joined. My first gig was a couple of hours after I first met the guys. I had to learn eight of the songs from that album on the spot. Touring that album was very important, it was a great way for me to get used to playing with them.”

Was there talk right from when you joined of getting back in the studio?

“An album was on the cards from as soon as I joined because we instantly clicked on a personal level and playing-wise. We had a lot of fun in rehearsal rooms just jamming.

"We had one writing trip when we did a festival in Spain in my first few months with the guys and we went out there a week before and did a writing session.

"We spent a few days there mainly having fun and then in the last two days we dug down with a tiny set-up and electronic drums and came up with 22 really solid ideas. That was when we realised it was going to work with us as a band.”

What kit did you use in the studio?

“I used my DW Collector’s kit, that is my baby. I don’t think I will change those drums for a long, long time. The bass drum is ridiculously he, it always gets the desired effect for our music. I use it live as well.

"The kick is 26”x26” and if we have a big gig I have this compressor that goes on the end of the bass drum. Once that’s on it takes no prisoners! That kit is indestructible. The way DW designs everything is like they’re scientists."

There’s some nice drum moments on the album. The Darkness strikes us as the kind of band that would encourage that kind of thing!

"Oh absolutely. Dan was pushing me. All of my drumming inspirations have a strict less is more rule and to play for the song and not for yourself. If there is even a smidgen of you showing off then ti is looked down upon. I think I kept as much to the song as I could.

"There’s a song called Southern Trains that has a ridiculously long drum fill intro. I was only planning on doing a bar or two but Dan kept pushing, ‘Nope, I want it eight bars long!’ We had a lot of fun with it. We did the whole album live as well.

"I’m a big believer in the Deep Purple approach of where they have a load of ideas and once they’re recording if you don’t get a good take from the first five takes then you should drop the idea.”

Will you get to show off any nice drum moments with a solo on your UK tour?

“The guys have been pushing me to do a solo! They drop me in it every now and then by just saying my name on stage and the whole band looks at me! I don’t really like being put on the spot, but I have pulled it off when that’s happened.”