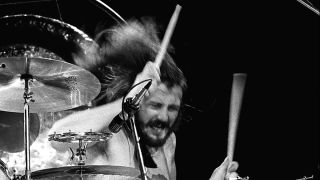 In any debate on the title ’greatest rock drummer of all time’, perhaps the only name 100% certain to make at least the shortlist every time, if not the top spot, is that of the legendary John Henry Bonham.

The driving rhythmic force behind rock ’n’ roll leviathan Led Zeppelin until his tragic death in 1980, at the age of 32, Bonham was a bona fide one-off. Every facet of the Redditch-born beat machine’s playing was uniquely ‘his’, from the dazzling combination of pace and power, through the incredible speed and precision of his right foot, to the masterful ability to push or pull a groove as the song demands.

Although the iconic pairing of Ludwig drums and Paiste cymbals defined Bonham’s sound in the studio and on stage, another essential component in all this was undoubtedly his drumsticks. Made by British manufacturer Promuco to his own specifications in the early 70s, they were nicknamed ‘trees’ by the great man – albeit in reference more to their resilience than their heft.

And now, for the first time in over 20 years, you can get your hands on the exact same beaters, as Promuco have reissued their officially approved John Bonham Signature stick.

Founded in 1964 by ex-Premier Drums production director Gerry Waller (and including his son-in-law, England cricketer Ian Botham, on the board of directors, fact fans), the ProfessionalMusicCompany was a major player in the drumstick market throughout the 70s, 80s and 90s, providing wood for the hard-hitting likes of Bonham, Phil Collins, Jet Black, Carl Palmer and Rick Allen, until Waller’s retirement brought the operations to a close in 2000. In 2017, however, Promuco’s erstwhile UK distributor, Barnes & Mullins, brought the company back to life, and today, the much-loved British brand once again offers a full range of hickory, maple and oak sticks in 2B, 5A, 5B and 7A sizes, as well as, of course, the rereleased John Bonham Signature model.

Although you might expect them to be relatively thick and heavy, at 1.5cm diameter and made of hickory, Bonham’s trees sit somewhere between a 5A and 5B in weight – his power came from a combination of physical strength and impeccable technique, and excessive stick mass certainly wasn’t a requirement. Rather, what sets the John Bonham Signature stick apart is its 41cm length, making it the longest in the Promuco catalogue (a few millimetres longer than the 5A and 2B), and the characteristic acorn-like shape of the tip. It also features the Promuco logo and Bonham’s signature, exactly as they were printed on the original, back in the 70s.

Genuinely historic in its provenance and more versatile than its stadium-scale affiliation suggests, Promuco’s John Bonham Signature drumstick is out now, priced around £12.00 per pair. For more information visit the Promuco website.