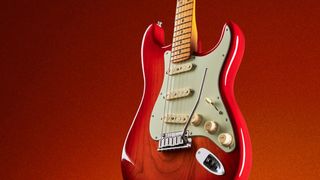 This is the big one, the best new electric guitars of the year. And it has been quite a year, with Gibson positioning themselves as a brand revitalised, Fender revolutionising its flagship US line, and a host of manufacturers stacking the spec high while keeping the price below £1,000.

This year's end of year list of new electrics – as voted by you, remember – has something for everyone. Those looking for a classic, stripped back rocker will have more than a couple of options. Shredders won't be disappointed either when the likes of Schecter and LTD are matching function and form with style.

And there are a few surprises, too, proving that within guitar design, despite all that's still gone before, the decades of groundbreaking designs, the future of the electric guitar is still up for grabs. It always will be. And that leads us nicely into 2019's best new electric guitar, the number one . . .

Fender's comprehensive refresh of its American-made Elites series sees some of the boldest electrics the California-based guitar titan has ever made, including a Stratocaster that really moves the design forward without losing a sense of its self.

What makes the Ultra Series Strat so great? Well it comes in a variety of cool new finishes, such as the pictured Plasma Red Burst, which was previously seen on the Rarities Series, and the Mocha Burst, which is surely one of the all-time great Fender finishes.

The biggest changes are reserved for the fretboard, which has a bolder and progressively flatter 10"-14" radius. The new neck profile is described as a Modern-D profile and is comfortably substantial while a sculpted heel enhances upper-fret access. The newly designed Ultra Noiseless pickups are super-versatile, especially when you factor in the S-1 switching, while the treble bleed on the volume ensures you don't lose high-end when you back the volume back.

Some Strats aim to bring back greatness, others want to create it in the here and now. This is the latter, and it is the best new electric guitar of 2019. Good luck to 2020 in topping this.

With its eye-popping finish and a faultless build, the PRS CE Semi-Hollow might just take your breath away, and, alongside models such as the Silver Sky, challenge the notion that the company's bolt-on models are in the shadow of their set-neck siblings.

Supremely playable, with excellent upper-fret access, and merciful on the lower back, the PRS CE Semi-Hollow is a premium electric you won't tire of in a hurry. And with two perfectly balanced humbuckers and a coil-split for some thinner more precise attack, it sits tone-wise somewhere between a Les Paul and Strat, fertile middle ground for the sonically adventurous player.

The Mexican-made Vintera series folds the previous Classic and Classic Player ranges into one line and aims to recreate period-appropriate tones and aesthetics for the contemporary player. The Modified Vintera Strat has a slightly more modern feel, but retains that time-honoured attitude courtesy of three Vintage-Style '60s Single-Coil Hot Strat singlecoils, with some wobble courtesy of a sublime two-point synchronised tremolo.

When it launched in 2016, the Revstar Series was Yamaha's first new electric guitar design in over a decade, and it soon found a market for players looking for a rock 'n' roll machine but something a bit different from that found on the axis of Fender and Gibson.

Featuring a flame maple veneer, the 502FMX is an eye-catching update to the template. It has a pair of well-voiced soapbar singlecoils, offering a bite and clarity, but in all the 502FMX's tone is anchored by a beefy, woody resonance that feels as though it is enhanced by that industrial-looking tailpiece, and it is a tone and feel that belies the price tag. You can pick this up for just over £600. Phenomenal value.

A stripped down rocker that is in essence a slab of mahogany with a pair of P-90 singlecoils and sweet wiring throughout. Like the LP Junior, the Special is build to play hard, ideal for those Leslie West Mountain tones. It has a slim-taper, set maple neck, a rosewood fretboard with dot inlays, a wraparound tailpiece that is a triumph of minimalist engineering, and it says Gibson on the headstock. What else do you need?

Another beauty from the Vintera Series, this time with a Bigsby offering some wobble on a meticulously appointed workhorse Telecaster. OK, so it is showing its age with the pau ferro fretboard, but the neck profile feels of an era when the colour TV was a novelty, and the 7.25" fretboard radius is good and round to make chicken pickin' your way around your cowboy chords a joy.

The finishes that Schecter rolled out for this year's Reapers are insane. Pictured here, Inferno Burst, a kaleidoscopic work of burled poplar that forecasts the sort of intergalactic shred possibilities presented by such a supercharged S-style electric. And make no mistake, this thing moves; it is effortless to play, with a neck profile that's on the slim side but never feels like it has abandoned you.

The Schecter Decimator humbuckers are incredible, too. There's no need to upgrade them; they're hot, they squeal, and if fretting a natural harmonic and divebombing with super-stable locking vibrato is your thing, your ship has come in.

A shreddable T-style that never goes out of tune? Where do we sign up. This premium chug machine from LTD should definitely attract the attentions of the black t-shirt demographic; it's ideal for high-gain metal, with a pair of coil-tappable active EMG humbuckers and 24 extra-jumbo frets on a none-more-black ebony fretboard. Oh, and it never goes out of tune. What's with that? Well, it's a little bit of a fiddle, but once you get your EverTune bridge all set, that's you, no more tuning, bend aggressively at will. Indeed, go bananas. This is built for it.

The very presence of this Gibson SG Standard Tribute will put the cat among the pigeons for any of you casting amorous glances towards the Double Cut Tribute. What's the big difference? After all, they've both got mahogany bodies, set maple necks, Gibson on the headstock? Well this has humbuckers, a pair of 'em, and a aluminium Nashville Tune-O-Matic bridge and stop bar. Still, it's gonna be tough choosing between them. Might this SG's clubbier neck sway you?

As if we needed an excuse to break out the pomade and tape echo, along comes the Center Block Jr, named for its – you guessed it – chambered spruce centre block, which helps kill a little bit of the squeal you get with these semi-hollows. The Center Block Jr has a slightly smaller body than its siblings.

Excellent value, a joy to play, with Bigsby wobble, and a quite stunning finish, this is a no-brainer for rock 'n' rollers, blues cats, anyone who enjoys the Gretsch vibe. The Broad'Tron pickups are bright and snappy for clean tones and are quick to snarl when you crank the gain up.

Here comes another Gretsch that's affordable, has a pair of Broad'Tron pickups, and is so cool it looks like it's been teleported in from the set of American Graffiti.

Once you wrap your arms around its big, old body, there will be no letting go. Its maple body and semi-hollow construction makes for a bright tone that will do twang, and as with the Center Block Jr, it'll show some teeth when you drive your valves hard. Roll back your treble though and you are in jazz land, and the thin U neck profile won't stand in the way of some fleet-fingered be-bop.

Epiphone have knocked it out the park with the DC-Pro. Reviving the forgotten Del Ray and tweaking it, giving it a premium look and feel, with excellent pickups and smart switching to get the most out of it.

Tone-wise, there's an LP vibe for sure – after all, it's mahogany plus maple plus more mahogany in the neck. But with coil-splitting and a treble bleed control, there is a whole lot more to its voice. And when it comes to PAF tone, those ProBuckers are pretty darn convincing too, especially at this price. You're looking at £450 or thereabouts street. That is value, folks, because this guitar is serious fun.

Featuring a sort of squashed S-style bodyshape, with two VTH-77 humbuckers and a neatly designed tremolo unit, the G290 FAT doesn't sound like it looks and vice-versa. It positions itself between contemporary versatility and a vintage sensibility, with the G290 FAT's 12"-15.75" compound radius fretboard a contemporary touch on an Ergo-V neck that's got more than a little retro ergonomics going on. Those looking to play rock of any era will find plenty of range here, and will be excused their disbelief when they see the asking price is less than a grand.

A pro-quality guitar that was designed by Patrick James Eggle and has an immaculate build, a pair of Seymour Duncan '59 humbuckers, a great neck profile, top hardware, plus it looks pretty cool too – there is a lot of like about this Shergold singlecut.

Let's talk about the hardware first. We've got staggered locking tuners, a brass three-saddle bridge that is custom-designed by Eggle himself, that helps lift the treble a bit. The there's the electronics, the coil-splitting for singlecoil excursions, but other wise a fuss-free three-way selector and master volume and tone controls. The aluminum inlays are cool, so too is the pickguard, so too is the price.

This premium electric from Leigh Dovey is going to mess with quite a few player's heads. Strat/Tele feel, LP-style looks, and yet with a lightweight chambered mahogany body and AAA flamed maple cap? Intriguing. It just goes to show how a fresh remix of some classic styles delivers and instrument that's its own thing.

Featuring a beautifully caramel brown-coloured roasted maple neck that's perfectly quarter-sawn, a six-saddle bridge and a pair of vintage-voiced Bare Knuckle Old Guard pickups, the Carey Elite is one of the best from a fast-rising British boutique guitar company.