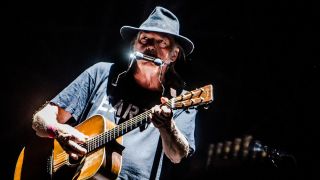 Musicians may be locked down but they're still up for playing shows - and live streaming allows some incredible opportunities for them to connect with audiences right now. Live streaming services are in such demand right now we could see a longer sea change in the way we watch live acts, but for now, here's some of the best gigs coming soon, or available to watch immediately.

And don't forget to check back as we'll be updating it regularly.

The Death Cab For Cutie man was one for the first to join the Live From Home livestream movement started by Chris Thile and he treated fans to a few – including Death Cab and Postal Service songs alongside some well-chosen covers.

This one was covers-only and saw the following played:

After their Spring tour with Kreator was postponed, Lamb Of God have announced  they will broadcast their live set from the Resurrection Festival last year on Knotfest.com today, from 7pm UK time. During the broadcast, guitarist Mark Morton will chat live to fans in the chatroom.

Hey! Hope everyone’s alright at home during this time of lockdown for so many of us round the world. I’ve been thinking about how I might be able to share something with you on Instagram Live. You may not know that when I was 18 I was a guitar teacher! SO, let’s get learning! I’ll be sharing some guitar tutorials over the next few weeks. Gonna start with some of my songs and see where it all goes. First lesson TODAY (Wed 25th March) at 5pm UK time! Come and join in :) x James Bay

Bay has already started teaching fans how to play his songs on Instagram Live and plans to continue with guitar lessons. Hold Back The River (above) and Let It Go are already available to watch.

Above is the second of Harris's Quarantine mixes   – set starts at 11:44  – proving geography can't keep one of the world's highest paid DJs down.

It's raised $8 million so far for FeedingAmerica and First Responders Children’s Foundation.

Samantha Fish rarely takes time off from the road so she's staying busy by performing songs on Facebook every Friday above and here .

This uncertain time is bringing out the best in many artists right now as they find ways of connecting with their fans and each other. We love the fact technology allows Fish to jam with fellow blues artist Jonathan Long via an iPad.

Jack White's label has started Third Man Public Access to offer daily performances. The first was a performance by Nashville pedal steel player Luke Schneider. His debut Altar of Harmony is released on 15 May via Third Man.

“I sincerely hope this music can bring folks some calm and inspiration during this uneasy time,” says Schneider.

The acoustic songwriter has been playing live from home for the last two Sundays. Check out the cover of Chris Isaak's Wicked Game 15 minutes in.

When the Pittsburgh metallers' hometown launch show for album Underneath was postponed responded they simply carried on and played the empty venue anyway, inviting fans to watch in real-time via Twitch.

More than 13,000 did and it's a unique, somewhat surreal performance - showcasing Code Orange vocalist Jami Morgan stepping out from the drumkit onstage for the first time.

A rare livestream opportunity to see how the acclaimed Doom soundtrack composer Mick Gordon works – a must for anyone interested in video game soundtracks or Doom in general.

Seasick Steve’s new album Love & Peace has been moved back back to 24 July with many of his shows rearranged too, but every Sunday at 8pm (UK time) he'll live- stream a performance of a different song via his Facebook page.

last night i invited @rhye over for the first corona sabbath. (We made that up because we we had iron on t-shirt letters.. maybe it will stick) . While we’re all in self imposed quarantine and I’m grounded from playing shows I am going to get creative and make up random sets and shows live from my house. up next sunday 3pm et @majorlazer... our albums done so we got a lot of new music...tune in on it live and @youtube #socialdistancing Thomas Wesley

“While we’re all in self imposed quarantine and I’m grounded from playing shows I am going to get creative and make up random sets and shows live from my house,” Diplo said as he introduced his first virtual DJ set on Instagram. You'll also get a peak at his interesting looking room filled with giant plants and bizarre props.

Not a live gig in the true sense but Metallica Monday's will see a different past gig added to Hetfield & Co's YouTube channel. Starting with Slane Castle from last year

The White Buffalo (aka Jake Smith) has new record On The Widow’s Walk coming out on 17 April but for a songwriter who relies on touring, the pandemic is going to hit hard. So for fans missing out the Americana musician has decided to preview the release with a special concert stream and fan chat.

It's happening on new platform Cadenza.tv and promises a 'premium quality' event that will see The White Buffalo play new material from the forthcoming album as well as fan favourites. There will be a live Q&A session after the set.

The band are planning on making live stream performances a regular thing every Friday and will encourage fans to 'tip' a different small business every week that has supported the band over the years.

Neil Young playing deep cuts out in the snow, at the piano and by the fire. What's not to like here? The second session can be watch over at neilyoungarchives.com

The Coldplay man played a 20-minute set as part of the Live From Home series, playing songs including Yellow and David Bowie's Life On Mars.