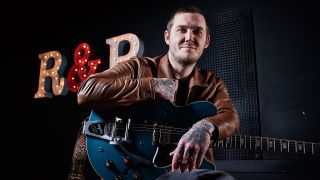 When radio show Live From Here host and celebrated Americana musician Chris Thile started a new new digital series called Live From Home last week in response to the Coronavirus pandemic. Musicians are encouraged to film themselves playing songs at home and so far the response has been overwhelming.

“We’re inside and not out there making music,” Thile explained in the launch video as he filmed in a closet at home. “So we thought we’d make music in here.”

Thile kicked things off with a cover of Wilco's Radio Cure from their 2002 album Yankee Hotel Foxtrot and musicians wasted no time in responding. We've collected some of the best cover versions by the likes of Brian Fallon, Ben Gibbard and Norah Jones.

As many of us are staying indoors, I’ve been asked to play the Live from Home Stage. Here’s a little cover of one of my favorite songs, Round Here by the Counting Crows. Due to cancellations, many artists may not have a stable income stream. If you want to support your favorite independent artist you can - by buying music and merch directly from them. I would also like to invite @scarrisonwhitford @leralynn and @thelobbyistsnyc to do their own videos for Live From Home Stage. You can also share your own music live from your home - use #LivefromHome and tag @livefromhereapm so they can reshare your work! Stay healthy and safe everybody! Brian Fallon

Hey everyone. I hope you’re ok in these strange times. If you’re in a position to make a donation, there are many organizations who are getting food or supplies to people in need. @FeedingAmerica, @MusiCares are a couple.#livefromhome #playdate #gunsnroses #patience #love(1/2) pic.twitter.com/KTaOsY4K1nMarch 19, 2020

Hey y'all! @livefromhereapm had the wonderful idea to start a series called #livefromhome. @christhile has kicked this off as way to create a digital space for your live music yearnings! Here's a little Cyndi Lauper from the comfort of my home with @taylrashtn. I nominate @emilykingmusic, @theokatzman, and @akiebermiss to carry the torch and create exponential #livefromhome growth! Because of cancellations and closures, many performers income streams have become unstable! PLEASE consider donating to a musicians fund or going to directly to the source- buy some merch, stream their music non stop, help them out! #livefromhome #livefromhere #emilyking #akiebermiss #theokatzman Rachael Price

Everything is strange and a bit scary right now. Here’s to spreading some love around... More to come... #livefromhome @postmalone @thejohnnolan @adamdamnlazzara @shaunwcooper @markoconnelltbs Taking Back Sunday

@livefromhereapm is now #livefromhome! I’m challenging @sarawatkins, @aoifemaria, & @mrslev & @johnleventhal to sing some songs for us. Side note - if you’re watching and you have the means, please donate to @communityfoundationmidtn in light of our benefit show being canceled. (P.S. yes I’m wearing my slippers in this video, duh.) Sarah Jarosz

Here’s “Strangers” by the Kinks for the Live From Home series from @christhile & @livefromhereapm. Thanks to @madicunningham for challenging me to join and in turn, I’d like call upon some artists I like, @blakemills, @mrjohnathanrice & @thehandsomefamily #livefromhome Andrew Bird

One of my favorite songs, coming to you #LiveFromHome ( cc: @livefromhereapm ) sending this out to anybody who's feelin stir-crazy or scared. I hope you're washing your hands a lot, practicing social distancing to the fullest extent you are able to, and beyond that, doing whatever it is that makes you feel good as we ride this thing out together. Sending lots of love, especially to the folks working in healthcare and grocery stores! Shirt by @tothtunes / guitar by @waterlooguitars / hair by can somebody teach me to cut my own hair over Skype Taylor Ashton

Kimberly Townsend plays These Magic Moments by The Drifters

52 WEEKS || 52 COVERS Song 11 of 52 • This Magic Moment ⠀⠀⠀⠀⠀⠀⠀⠀⠀ i meaaan. it’s a strange time to be living in nyc. it’s a strange time to be watching the news. it’s a strange time to be a human being minding your own business anywhere on this globe, y’know? sending my love out to you and your family and friends and your town and city and country and living room. maybe this song can help you take a 2.5 minute break from the #coronavirus updates everywhere you turn. ⠀⠀⠀⠀⠀⠀⠀⠀⠀ i was lucky to get to sing this song for @2her & @alyt0o’s first dance as wife & wife. 🥂💛✨ and now i get to sing it for you! ⠀⠀⠀⠀⠀⠀⠀⠀⠀ thank you to #BenEKing and #TheDrifters for creating solid gold. composed by lyricist #DocPomus + pianist #MortShuman. 🔗 link in bio. 🔗 ⠀⠀⠀⠀⠀⠀⠀⠀⠀ ▶️🔔 subscribe on YouTube to be the first to hear. new upload every Friday in 2020. just search Kimberly Townsend. 🎶 Kimberly Townsend