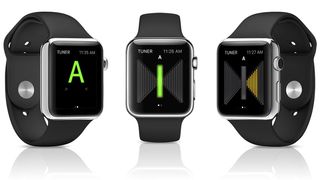 IK Multimedia's UltraTuner is already Apple Watch-compatible, but will there be any apps that actually help you to make music?

With Apple pushing their highly anticipated wristwear more fervently than even the iPhone right now, is there anything to this remarkable but controversial new gadget of direct relevance to music production or performance? Five developers spill their brains…

"First of all, Apple Watch is not a standalone product, but rather a fancy remote interface for your iPhone - one that needs to be charged once a day. To make it worse, third-party apps can't play sound out of Apple Watch's speaker and have no access to sensors like the gyroscope and accelerometer.

"Maybe we could use it to control desktop applications, but would it be convenient? I don't think so. To be honest, I'm not even sure that it will have any meaningful apps for non-musicians."

"I don't think there will be any 'meaningful' Apple Watch apps for musicians at launch because, as far as I know, there is no way to even make standalone apps for the Apple Watch.

"There will, however, be remote control-like extensions for existing apps that run on the watch. I expect to see a lot of transport controls for streaming apps like Spotify, and maybe some BPM tapping stuff for DJs."

"Meaningful is subjective, but I doubt we'll see any apps where you can create whole tracks.

"However, I can imagine [Apple Watch] being used as a controller. It has sensors that could be fun to use as triggers - for example, the heart rate sensor could send out a MIDI signal. Not really meaningful in a studio scenario, but perhaps an interesting performance gimmick. Same goes for the accelerometer; even though that's not a new thing, when it's on your wrist, it could be useful for controlling other devices."

"I think the Apple Watch will act as an alternative interface to other apps and DAWs. It could work as an extended view to alter an app's parameters while another app is in the foreground of the iOS device.

"On the other hand, by using the accelerometer (and the heart rate sensor) one could create some very interesting MIDI transmitting apps - for example, you could twitch your arm to alter a synth's pitchbend."

"The main advantage of the Watch is quick access to information without needing to pull out your phone, so the ideal use case for it might be allowing live musicians to take a peek at their set list or giving wandering sound engineers a fast way to adjust their digital mixers at a venue.

"It may also be a nice little control surface for a synthesiser or Kaossilator-type app - it is pressure sensitive, after all."