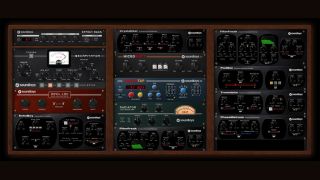 Soundtoys has developed its own Effect Rack.

When you need a plugin host but you don't actually intend to record or sequence anything, there are now more options on the market than ever before. It all comes down to stability in a live context and resource usage, reckon our five industry insiders…

"I think this all comes down to virtual instruments and live performance. We've reached the point where even a modest PC can handle incredible-sounding plugins well enough to be played in real time. The ability to load up a notebook with hundreds of great sounds gives musicians a lot of room for creativity and a lot less gear to take on the road. However, for this to work effectively, you're far better off with a nimble host designed specifically for live performance"

"I think there are two main reasons for this recent trend: one has to do with the fact that Avid seems to be more willing now to allow VST-AAX or AU-AAX wrappers than they used to be. Then, the use of JUCE as a development framework is now more widespread, offering, to the experienced developer, a relatively comfortable way to write plugins that host other plugin formats."

"Using a computer as a musical instrument has always been a real dilemma. On one hand, a computer is now unanimously recognised as a powerful tool that ably replaces a large set of bulky, sometimes unaffordable or even nonexistent musical devices. On the other, it retains the image of a studio tool, which is not conducive to a direct and physical relationship.

"Non-DAW hosts probably attempt to resolve this dilemma by providing a different workflow that suits the logic of musicians (keyboardists, especially) or technicians in live situations, who just want to forget their computer while taking advantage of its immeasurable power/price ratio."

"Our plugins were designed to work as a complete system, and an effect rack was part of the first design spec. It's taken us this long to design a complete-enough set of effects to make the idea useful, and for increased CPU power to make it viable. I think the popularity of 500 series rack modules, the new wave of modular hardware synths, along with higher-resolution displays, and artists getting more comfortable with using computers outside the studio - for live performance - has helped push this idea into the mainstream."

"It's much more convenient to launch a light host application to play a virtual instrument with effects than having to load a full-featured DAW. With such a host, you can use a laptop as an instrument on stage. Also, we're all using several DAWs nowadays, and when available as a plugin, a third-party chainer lets you share configurations between DAWs."