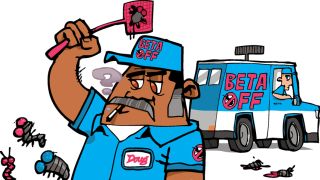 When you hear that a new or updated piece of software that you're interested in is 'in beta', your immediate reaction is usually a positive one: 'Great - it's nearly ready to be released!'

Once beta testing has begun, it's easy to assume that the hard programming yards have been covered and now it's just a case of dotting the 'i's and crossing the 't's. Is this really the case for every company, though? Some products seem to be in beta for just a few weeks, while others remain in this state for months - maybe more! In some cases the beta process is shielded from users, with the public only hearing about the product when it's ready for release; but in others, the great unwashed are asked to test several different versions.

Also, how do developers know when beta testing should stop? Can a product be declared 'finished' once it's out of beta, or does this just mean that it's stable enough to be sent to market?

To beta or not to beta

Let's try to define exactly what a company means when it says that its software is 'in beta'. Scott Fisher is Communications and Marketing Manager at Image-Line, developers of FL Studio. How would he define it?

"I suppose we would contrast beta with alpha," Fisher says. "In alpha, the software is still under development, is likely to have structural changes and is tested by perhaps ten to 20 people. We go to beta when we have found most of the bugs we can with the alpha group and the software is basically in release form.

"At this stage, it is far less likely to have any structural or design changes, but we are always open to that possibility. This phase is mainly about bug-hunting based on the wider testing and gathering feedback on workflow issues."

Jonathan Hillman is Product Manager for PreSonus's Studio One. His view is that beta software "is a version that is ready to be evaluated beyond our internal group. At that point, to our knowledge, everything works as intended. The scope of the release is more or less proportional to the length of time we spend in beta; that is, a larger release requires more extensive beta testing."

This is confirmed by Ohm Force, which is putting the finishing touches to its long-awaited, collaboration-friendly DAW Ohm Studio - the beta phase is currently in full effect.

"Ohm Studio actually needs more beta testing than other sequencers because you need to also test the server loads, bandwidth, storage and features such as collaborative freeze that deal with non-shared plug-ins with a handy bounce. That means not only a beta, but a public one."

Ah yes, the public beta testing programme - this has become increasingly common in recent years, particularly as the internet has made it easier for users to get hold of software and submit feedback on its performance. What are the benefits of public beta testing versus in-house/private evaluation, though?

"Public beta testing involves a huge quantity and variety of systems, which is very desirable," says Hillman. "However, the quality of feedback tends to be inversely proportional to the size of the beta group. There's also the obvious disadvantage of showing your hand to the competition, which matters when you are innovating."

There may be pros and cons to public beta testing, then, but Image-Line's Scott Fisher is of the view that the positives far outweigh the negatives - both for developers and users.

"We adopted a strategy of public beta testing many years ago, simply because it means that when we do launch software formally, it's been pretty thoroughly tested by tens of thousands of people. We also have a core of customers who love to get their hands on our latest products as soon as possible. It's a win-win really."

Is it the case, though, that customers are constantly being asked to use software that isn't finished? Scott Fisher doesn't think so.

"Using the beta is entirely optional," he says. "We always direct customers to the latest official release for time- and mission-critical work. We do our best to keep the two separate in our customers' minds."

Ohm Force makes the point that if you're going to send your beta out for public testing, you need to ensure you don't do it too early in the process.

"If we had given access [to Ohm Studio] to anyone at the early stage of development, most people would have been disappointed, to the extent that frustration caused by technical failure would have been greater than frustration caused by staying on the pending list. Public testing can begin when a product has reached a certain level of quality but now needs larger-scale feedback."

Knowing when to stop

Just as importantly, how do you know when beta testing should end? "We set and track objectives for releases: address certain issues, expand or add features, rethink an interface element, and so on," says PreSonus' Jonathan Hillman.

"When the objectives are met and stability is solid in our in-house tests, we enter beta. When stability is reported as solid within the beta group, and we're satisfied that no workflow issues have come up, we're finished."

That sounds pretty clear, but 'finished' can be a tricky concept in software development, as Ohm Force confirm.

"The truth is that Ohm Studio, like any DAW, will never be finished. Remember Ableton Live 1.0: it had a really innovative feature, but was also missing other big ones - it had no MIDI instruments at all! Many features that we consider essential were added in later versions.

"Well, the same goes with Ohm Studio. As of today, no one offers a collaborative solution comparable to ours. While that and other aspects of Ohm Studio will be improved over the years, some people are very happy to use it already. That's one key marker - not for saying it's 'finished', but for the release. The other marker is having the package of features and bug fixes without which selling Ohm Studio would feel unacceptable."

What should a company do if they've reached a set deadline for the end of beta testing and know that there are still problems to be fixed? Should the beta period be extended, or is it better to release first and iron out the kinks later?

"Deadlines are man-made, so they are always open to being changed," says Scott Fisher. "If it's not ready, it's not shipped. On the other hand, software will always have bugs. Every developer knows there will be issues no matter how thorough the beta test was."

In other words, you can beta test for as long as you like, but there will inevitably be some bugs that slip through the net. The important thing is that any issues that do remain aren't fundamental to the way the software works and performs.

"If those issues have the potential to affect stability or functionality for a large number of users, no, [the software] should not be released," says Jonathan Hillman. "At the end of the day, users correctly value stability over everything."

This article originally appeared in issue 182 of Computer Music magazine.