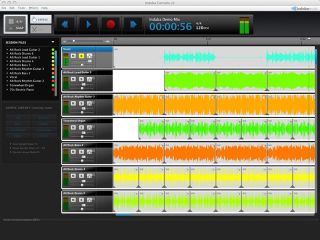 Indaba is preparing version 2 of its online DAW.

Indaba Music, the networking and production site, has announced that it's developed a new online DAW that enables you to record audio 'to the internet'.

The site already has a simple browser-based app, but the new one improves on it in several key areas. Using Java and JavaFX, it enables you to record, mix and edit your performances, and also comes with a selection of loops and effects.

What's more, you can drag the software from your browser to the desktop, making it possible to use it both on- and offline. Indaba is so confident in the quality of its new tool that it says that it "eliminates the need for local recording software".

Whether this is true remains to be seen (the app is currently in beta and will be available publicly in July) but it does seem to mark a step forward for the online DAW concept.

"I got different companies contacting me all the time trying to get me excited about their products, and most of the time I just don't care," he says. "But this particular application, the Indaba Music Console, caught my fancy.

"It's like a simplified version of any of these complex professional recording programs that no one like me knows how to use. It's going to open the door for a giant population of musicians out there, a giant resource for somebody like me."

Time will tell whether the software can be a serious rival to the likes of Apple's GarageBand, but the specs do look promising. You can find out more at the Indaba Music website.