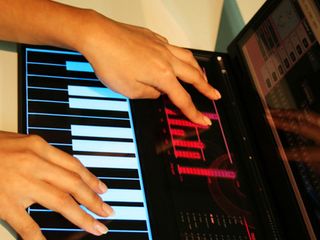 With MIDI controller keyboards and laptops/netbooks getting ever smaller, creating a truly portable music-making system is now easy. However, Vivace is a solution that looks to be more integrated than anything we've seen before.

Designed by Young-Shin Lee and Hae-Jin Jung, it looks something like a musical laptop: a slimline device that offers a touch-sensitive musical keyboard and fold-out touchscreen display.

Vivace is a concept product at the moment and 'specs' are thin on the ground, but you can clearly see octave up/down buttons to the right of the keyboard, and we can only assume that audio I/O is built-in.

However, while the product is certainly eye-catching, we have to wonder about its viability in the current marketplace. As we've already noted, creating a portable studio that can run fully-fledged production software isn't difficult, so the Vivace would have to be something pretty special in order to compete.

Whether its developer will ever give it that chance remains to be seen.