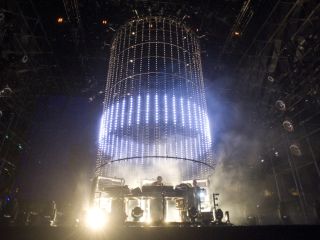 Filmed with 20 cameras at a headline show at Japan's Fujirock Festival, the upcoming Chemical Brothers documentary, Don't Think, takes fans onstage and beyond.

According to a press release, Don't Think, directed by Adam Smith, a long-term visual collaborator to the Chemical Brothers, follows selected audience members away from the stage and out into the natural environment. Then, by adding avant-garde "magic realist" moments where trippy visuals leave the screens and invade the open spaces of the festival, Don't Think undergoes a transformation from concert film to fully immersive document of one of the most mind-bendingly psychedelic live shows ever seen.

Shot on location on Sunday 31 July 2011, Don't Think is the first concert film to feature Dolbly 7:1 surround sound, and it was mixed by the Chemical Brothers themselves. It is due to be shown on more than 500 screen in over 20 territories from 1 February (3 February UK). Before that, however, the film will be screen in advance previews in 20 territories on 26 January.

The Chemical Brothers had this to say of the film: "In the recording of a single show - a single night on a Japanese mountainside - Adam Smith, our long time collaborator, has managed to capture the atmosphere of a very special festival appearance. Come see how it feels to feel, be overwhelmed, intoxicated, swoonerated… Surrender to the void" - Tom Rowlands

"This film is the closest I will ever get to being at a Chemical Brothers show… and yeah, it's a beautiful experience." - Ed Simons