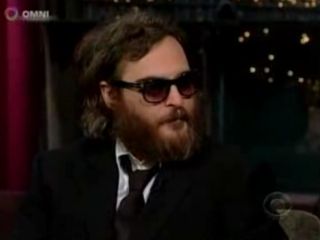 Is Phoenix's career change for real?

The behaviour of one-time Oscar nominee Joaquin Phoenix grows ever more erratic. Following his dishevelled appearance on The Late Show With David Letterman last month, he now appears to have attacked a punter during one of his hip-hop gigs.

As previously reported, Phoenix claims to have given up acting to pursue a music career, but it seems that one fan didn't warm to his rap stylings in Miami last night.

Reports indicate that the Walk The Line star took to the stage at around 2am, and then responded to the heckler by shouting "We have a f****** b**** in the audience".

He continued: "I've got a million in the bank. What have you got b****?". His next move was to launch himself into the crowd, seemingly with the intention of putting the hurt on the guy in question.

Suspicions remain, however, that this could all be part of an elaborate hoax. Phoenix's brother-in-law Casey Affleck was in the crowd with a video camera, and there has been speculation that Phoenix's bizarre behaviour is being affected for a spoof documentary that he's making.

Time will tell if these rumours are true - this footage, though, is certainly very real.