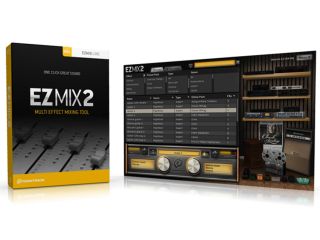 Following the success of EZmix, which was released in 2010, Toontrack has released EZmix 2, which promises to deliver even better results through a wider variety of features.

EZmix 2 continues to build on the same fundamental idea: having mix-ready effect chains designed by audio professionals only one click away, making mixing music not only easy and incredibly fast, but offering results second to none.

The new and revamped version comes with a revised interface, guitar amp and cab simulation, new effects and signal chain content. In essence, EZmix 2 is a one-stop shop to realize a professional, release ready mix quickly and efficiently.

Get the perfect sound for every instrument and mix situation by just one mouse-click.

No need to combine countless plugins and routings on a channel to get the sound you're looking for - just use one instance of EZmix 2 instead.

Save plugin and CPU resources by only using one plugin instead of many.

Stay focused on your music and sound by leaving the engineering to seasoned professionals.

What's more, you can expand your EZmix 2 with a huge collection of optional EZmix Packs, created by various producers and engineers for different musical genres and mixing situations.

Registered users of the original EZmix can upgrade for just £29.00!