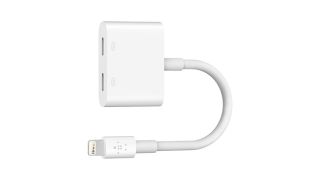 It feels like, already, more has been written about Apple doing away with the headphones jack on the iPhone 7 than any of the device's new features, but the story still has some way to run.

People quickly realised that, although Apple will include a 3.5-mm audio adapter in the box, the fact that this plugs into the Lightning port means that you won't be able charge your phone or plug in a peripheral (a MIDI controller, for example) at the same time.

However, Belkin has come up with what looks like it could be a solution to at least one of these problems: the bafflingly-named Lightning Audio + Charge RockStar adapter, which is basically a £35/$39 hub that turns one Lightning port into two. This enables you to plug in your Lightning headphones - or Lightning-to-3.5-mm adapter - and a charger at the same time.

This is sort of good news, though we're not sure if the adapter would help if you want to plug in some headphones and a USB controller at the same time. The Belkin website states that the device "supports one Lightning Audio device and one charger only," so using the second Lightning port for anything other than charging might be a no no.

Even if it does work, you might still end up needing not only the Belkin adapter, but also the 3.5-mm audio adapter that came with your iPhone 7, and a Lightning-to-USB adapter, both of which would plug into the Belkin one. That's three adapters in total - hardly an elegant workaround.

Apple is also offering a solution of sorts, too. The iPhone Lightning Dock sits on your desk and, as well as charging your phone, offers Lightning and 3.5mm audio ports. However, it's not portable, so is no use if you want to make music on the go. It costs £49/$49.

These are the options we've seen so far, but there are sure to be more on the way. Could a single Lightning-to-3.5-mm-jack-and-USB-and-Lightning adapter be on the cards? Let's hope so.