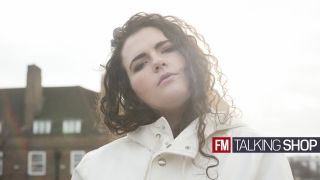 Percussionist, songwriter and producer Georgia's eponymous debut LP for Domino Recordings is a heady mix of Punk energy and Hip-Hop-inspired rhythms, bound together by off-kilter Synth Pop reminiscent of The Knife.

With the album out now, and a tour as support act for Hot Chip coming this October, FM caught up with Georgia to find out about the gear and influences that go into creating her unique sound.

"Ever since I was a kid really. I've been told by my mum that I used to experiment with writing songs on Casio keyboards that my dad had around the flat and stuff. I think the first musical gear I got was a small electric guitar, I've still got it in fact, I thought I was the coolest kid in school. I used stand in front of the telly trying to play along with the kids' programmes pretending I was Jarvis Cocker!

"I'm not sure what genre of music I was making back then, I wrote one song called "Holiday" which is self-explanatory I guess, and based on major chords or the one chord I could play! I think the lyrics were: "Holi Holiday, Holi Holiday, Singing in the sun, singing in the sun." I used to boss my brother around whilst he was providing the backing vocals, diva from an early age! I think as a kid I was inspired by pop music. I loved Britney, Michael Jackson, Pulp, No Doubt - but when Missy Elliot came along I became pretty much obsessed, I thought it was boundary-breaking and unique."

"To make this first album, I was in between a bedroom set-up and a home studio that I shared with another artist. The home studio is a great little space where really I could set up my laptop, monitors, desk and outboard gear. It's a perfect environment for me, really shut off and disconnected with the world. I like that.

"I'm really into using as much hardware as possible as well as plug-ins, most of the synth lines on the album are played on keyboards such as the Dave Smith Mopho or the Nord Wave, or in fact the little microKorg, which I love! I love mixing a raw sound from hardware with a processed sound. I aim to get crisp produced sounds from keyboards but twist it up using plug-ins effects that I've made on the laptop."

"I've always used Logic. I was introduced to it in my teens and just became used to it. But I'm now in between Logic and Ableton."

"I've become really attached to my audio interface. I bought it when I was 18, it's a Focusrite Saffire, it's super old now and on its last legs, but I've written all these songs on it and my first album. I feel really attached to it. But sadly going to have to upgrade, but it's going to be in the studio with me as a lucky charm! I like how simple it is, and it came with four plug-ins - compressor, noise gate, reverb and a limiter - and was easy to transport."

"My latest edition is a new keyboard. It's the Dave Smith Mopho x4. I picked it up because the old one is a mono keyboard and really unique sounding but I used it all over this first album and when I read that they had made an upgraded one that was poly I was sold! It's really amazing. I'm loving it, and already started writing loads more new material on it."

"I would love to enter the world of the Kyma system. To have that set up in the studio would be such a treat."

"I don't feel like I follow a regular pattern when I'm writing music. I start sometimes with a pre-conceived drum pattern, or a melody on a keyboard and bass line. Sometimes the approach comes from inspiration from all types of music I would be listening to or production sound that really conjures up some ideas.

"My melody lines develop as all the elements develop on the track, I often apply multi layers and add different textures whether to the drums or the bassline so it gives it an extra twist. The vocal I always sort of add last really. But all while I'm creating the track in my head I will be gathering ideas of where the vocals should go. I jam with myself... Is that a jam though?"

"I'm currently developing the live show, which very much includes the studio because I've been in pre-production making sure all the electronic sounds that we play are accurate and will impact in the live environment. There are projects that hopefully I will be involved in but not allowed to go into detail. Sorry. But it is all exciting!"

Don't be too critical

"Don't get too critical early on of what you're developing, either in the studio or in your bedroom. I would throw yourself into whatever song you're doing and try to aim to finish it ASAP - any song is always a useful tool. Throw all your ideas and then reach a stage where you're able to take elements out and work on the mix. "

Bounce tracks at the end of the day

"Whatever stage you're at in the song, when you finish for the day always make a bounce. I know it's simple, but it's good to live with your idea. You never know, while you're making tea or travelling you may come up with that one idea that ties the whole song together, and it's because you have been listening to it and developing it in your head with the bounce, listening to it through your iPhone speakers or at your friends' places."

"You know what, always back up! If you can spend a bit of money on a back-up system do it, and whenever you create a new song on the computer get into the pattern of backing it up instantly. It's these simple tasks that don't get you in sticky situations."