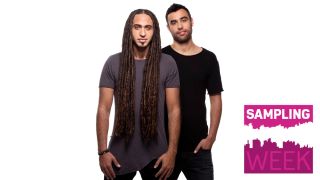 SAMPLING WEEK: Students at McGill University, Montreal, Ossama Al Sarraf and Ned Shepard aka Sultan + Shepard first became acquainted in 2002 when the latter handed Sultan a demo CD during a DJ set. Within a decade the duo were championed as Kings of the Progressive Scene by Beatport due to countless chart topping remixes and collaborations with the likes of Junior Sanchez, Bruno Mars and David Guetta.

Still at the top of their game, last year saw dramatic success as their collaboration with Dillon Francis on the single When We Were Young clocked up two million SoundCloud plays. Having recently renewed their residency at Las Vegas' premier electronic music hotspot, the Light Nightclub, Sultan + Shepard have been busy hitting countless festivals and clubs across the globe. Thankfully, the duo found time to chat to us about how sampling has become such a big part of their production process.

What samples have influenced your sound over the years?

"We love old House and have sampled quite a bit from the music that influenced us early on. We loved the way The Prodigy pitched up old Disco records like No Good. Also, just listening to Armand van Helden (U Don't Know Me), Fatboy Slim (Right Here, Right Now) and Daft Punk samples, understanding how obscure some of those samples really were and how it took an amazing ear for them to hear those nuggets of gold in there."

Is sampling an art in itself?

"With a lot of Kanye's music or RZA's beats, the music they choose is often not really obvious, or if it is obvious the way they pitched and chopped it is perfect.

"If you listen to Stardust's Music Sounds Better With You, they sample a very brief guitar riff by Chaka Khan, but if you listen to the original it's not something that necessarily stands out. The way they flipped it made it sound like such an immediate hit; it's extraordinary."

How do you go about finding those sample 'nuggets'?

"When we were working on Bad, the track we co-wrote with David Guetta & Shotwek, we wanted to get the vibe from those House and Hip Hop records that used the Ensoniq ASR-10 and other old samplers, but we couldn't find any good samples that we loved. So instead, we sat down with the vocalist Vassy and created something that sounded like we had pitched it up and run it through a sampler."

Do you use found sounds or field recordings?

"One time we found a nature CD with all of these animal noises and sampled a seal noise that we pitched up and chopped really short. We ended up adding massive amounts of reverb and it became like a percussive chirping effect that sounded great. It sounds nothing like a seal now, but we always laugh when we hear it because we know what it really was!"

How much of your production involves sampling?

"We sample in pretty much all of our tracks. We learned to produce on Pro Tools, which has a great interface for chopping up audio, so sampling has been a part of our production language from day one.

"We're always listening out for cool hits and drums fills, things that we can pitch up or chop up, and even sample the vocals that we record by chopping them up and reorganising them to make new melodies.

"The chorus on our song Walls, for example, was originally a different vocal line that we chopped up and made into a different melody. It gave the song a 'remix' quality, but it still felt like a coherent melody and was much hookier than the original line."

Where would you normally derive samples from?

"We sample from different songs that we hear, but only small parts, not whole riffs or anything recognisable. We use sample packs as well and have a massive library that we've compiled over the last ten years."

Which sample packs do you most frequently turn to?

"There's so many that we use. Mutekki Media makes some great ones that have amazing textures, especially Techno loops. Vengeance sample packs are great because they really understand fills and FX that immediately sound great in a song, but it's hard to find stuff that 500 other producers haven't already used in their tracks.

"Sample packs are great for giving you a quick idea, but the worst thing is when you sample something from a pack and then you hear the same sample in another song, so we like to sample each drum sound individually. That way it feels more unique."

Do you ever create your own samples from scratch?

"To be honest, you have to have a really specific ear to pick out great samples, and also a massive music library - you can't force it, so we often just create and sample our own ideas. We'll record various guitar licks and keyboard lines, save them for something that fits and then import them and chop them up to fit a new song.

"We've experimented with recording drum machines into Pro Tools and sampling them back into our songs - sometimes you can get really cool moments."

1. Getting an old-style sample sound from a DAW

"Most of our sampling happens by simply importing audio into Pro Tools and using pitch and other audio effects to adjust the audio to how we want to fit them into the music. The process is straightforward, but actually a very effective way of mimicking old samplers."

"It's amazing what a little pitch shifting does to the texture of a sample. Also distortion is a great trick for samples; it makes everything feel like it came off a record and not a sample pack."

"Always have an ear out for textures and sounds that you like, even if it's just a clap or a bunch of pigeons cooing at the beginning of a song. If you like that then record it and put it in the memory bank of your mind.

"One day when you're working on something you'll say "Oh, I need a bird noise" and you'll remember that thing you sampled - it sounds kind of ridiculous, but it's true."