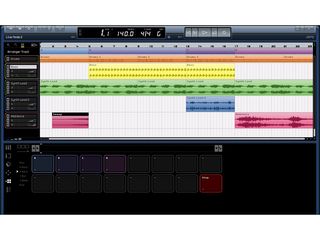 It seems that little has changed on the Sequel interface.

With the first version of Sequel, Steinberg made a decent fist of producing a cross-platform music-making application that pretty much anyone could use.

Now the software has a, err, sequel, which, despite looking pretty similar to its predecessor, does add a few noteworthy features.

Take the Controller Learn Mode, for example, which enables you to quickly and easily set up your hardware to control any of Sequel 2's functions, instruments or parameters.

Track Freeze, meanwhile, enables you to free up processing power so that you can add more parts to your arrangements, while Track Icons make it easy to visually label your recordings.

Elsewhere in the app, improvements have been made to the MediaBay sound management system, while there's a new Audio Reverse effect and an Audio Warp feature.

On the downside, there's still no plug-in support, which limits the software's expansion potential. Full spec details are available on the Sequel product website.

Sequel users should also note that three new Sequel Content Sets have been released: Rock, Industrial and Hip Hop. Each of these contains 200-300 loops in the style that its name suggests.

Sequel 2 costs €99 and is available from the Steinberg online shop (existing users can upgrade for €29). The Sequel Content Sets cost €14.90 each.