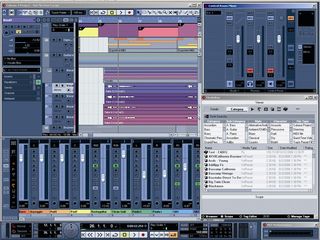 Will Steinberg be announcing an update to Cubase at Musikmesse?

Steinberg has been fairly quiet on the product launch front recently - in fact, it seems to have been focusing more of its attention on discontinuing software than releasing it - but we hear that there will be some new stuff from the German developer at the 2008 Frankfurt Musikmesse.

The company has arranged a press conference at 10am on March 12 - the first day of this massive trade show - and is saying that it will be unveiling several “completely new products”.

We´re assuming that this means we can expect something rather more than an update to Cubase 4 (though it wouldn´t surprise us if this was announced as well), but we don´t yet know what kind of ‘new products´ we can expect.

We´d be surprised if Steinberg launched another full-on music-making application at this stage - it´s less than a year since it released Sequel, after all - so maybe we´ll be treated to a fresh plug-in or two.

Whatever the news, we´ll have it here as soon as it´s made public. You can browse the current product line at Steinberg´s website.