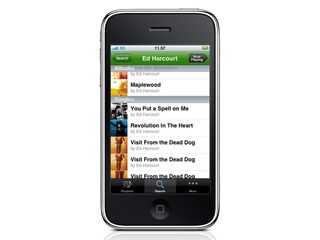 Spotify's much-talked-about iPhone/iPod touch app can now be downloaded for free from Apple's App Store, though if you want to use it, you'll also have to have a Spotify Premium Subscription, which costs £9.99 per month.

As previously reported, the new app enables you to stream Spotify's full catalogue to your iPhone or iPod touch. You can create playlists and sync them with Spotify on your Mac or PC, and these can be temporarily downloaded so that you can continue to listen to music when you're offline.

"This is a hugely significant day in Spotify's short history," said Gustav Söderström, director of portable solutions at Spotify. "Since our launch last October, we've worked hard to provide our users with a high quality service that gives them access to whatever music they want, whenever they want it."

"The launch of the Spotify App for iPhone and iPod touch now provides our users with the best of both the online and offline worlds, making it even easier for users to listen to all the world's music, anywhere on the planet"

The app is available now from Apple's App Store, while a version for Android-powered mobiles has also been released in the Android Market.

To find out more, read our sister site TechRadar's hands-on test of Spotify for iPhone.