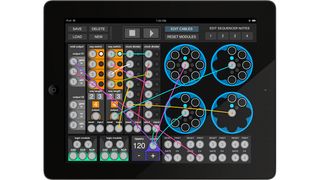 The cable guy: connect your components in any way you see fit

This week sees the release of a modular sequencing iPad app, the Spectre MIDI Sequencer, courtesy of developer Anthony Henderson. According to sources, the app has been built to emulate the way analogue modular synthesizer sequencing systems operate.

The app, which is available from the App Store for £5.49/$7.99, enables users to generate a variety of sequences from inbuilt modules.

Its basic components include four sequencers, two clock dividers, two sequential switches, two logic modules and two independent MIDI outputs - each with an optional sample and hold feature. In true modular style, these components can be connected by cables in any particular order that takes your fancy.

Check out the video below for more details, or if you want to dive right in, visit the Spectre MIDI Sequencer on the App Store.