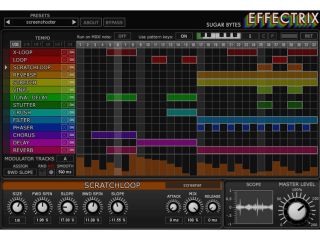 Effectrix looks to be bursting with processing possibilities.

Originally, plug-ins were either effects or they were instruments, but these days, we´re seeing more and more that have a foot in both camps. Sugar Bytes´ new Effectrix is a prime example: it´s an ‘effects sequencer´ that´s said to enable the creation of extraordinary sounds.

The plug-in offers looping, scratching, crushing and stretching tools, and also contains standard effects such as chorus, delay and reverb.

It´s built around a 32-step sequencer matrix, and there are two modulation sequencers per effect. A further 12 sub-sequences are also onboard - these can be triggered via MIDI and host automation.

Sugar Bytes is particularly proud of the scratching facilities in Effectrix, claiming that they enable you to recreate the classic vinyl sound. The plug-in can also be thought of as a groovebox, we´re told, and can be used to create complex breaks in a live set.

All of which sounds very interesting - we´re inclined to suggest that you download and try the demo of Effectrix today. Like the full product, this is Mac- and PC-compatible and runs as a VST and Audio Units plug-in.

Effectrix costs $129/€99 and can be purchased on the Sugar Bytes website.