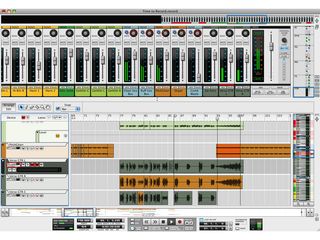 Record: it does what it says on the box.

Propellerhead Software has put an end to speculation regarding its latest software launch by announcing Record, a completely new application that - surprise surprise - is designed for hard disk recording.

This represents the Swedish company's first foray into audio capturing territory, as Reason, its other major app, has never offered recording functionality.

Despite being a different kind of animal to Reason, though, Propellerhead is adamant that Record shouldn't be though of as a DAW. Instead, it's designed for people who want a simple yet powerful tool that will enable them to write and record songs.

In short, this is an application that's primarily for musicians rather than hardcore engineers and producers.

That said, the feature set is likely to pique the interest of pretty much everyone The standout inclusion is probably the mixing desk, which is modelled on SSL's highly regarded 9000K hardware. This offers flexible routing, full dynamics, EQ, advanced effects handling and complete automation.

For guitarists, there's a built-in virtual Pod from Line 6. This ships with a variety of models as standard, and if you plug in your Pod hardware, all the other ones you own will be available for selection from within Record.

The main arrange page looks pretty standard - Propellerhead hasn't tried to reinvent the wheel here - and each track has its own Reason-style rack of audio processing gear. A selection of built-in sounds is provided, too: these are contained within a simple sample player and can be triggered by your MIDI keyboard.

Another thing that's worth mentioning is Record's audio engine, which enables you to change the global tempo and have every track respond immediately. There's no need for any warping: it just works. You can also change the sample rate on the fly.

Songs created in Record are all compiled into one file, which will make sharing projects among collaborators very simple (although these files can be very large). You can also easily export multitrack audio files for use in another application.

Speaking of other applications, users who already own Reason will find that all their favourite Reason devices are available in Record when they open it up. This total integration means that, if they invest in the new app, they'll effectively have the built-in audio recording that many of them have always craved.

One thing that Record doesn't do, though, is support plug-ins, and this will undoubtedly be a sticking point for some. However, Propellerhead does suggest that the processors and audio engine in Record "use a computer's processing power to its fullest," adding that "users will never have to worry about track counts, latency issues or adding that extra reverb or effect".

Beta testing starts today - we'll bring you an in-depth preview on MusicRadar as soon as possible. In the meantime, take a look at our exclusive video report from Record's UK launch in Guildford.