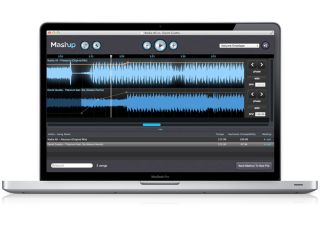 Mashup: tells you which songs work together harmonically.

There are plenty of music production applications out there that are suitable for creating mashups, but Mixed In Key's Mashup software is the first we've seen for Mac and PC that's designed explicitly for the job.

The big idea is that it enables you to make a mashup in a matter of minutes. Mashup analyses songs for key and tempo, and shows you which ones are 'harmonically matched' (those that will sound good together, basically).

Once you've started mashing, you can adjust the volume and EQ of each song using break-point-style automation.

For more on Mashup, check out the video above or read the press release below. It's available now for Mac and PC priced at $39.

Mixed In Key has released Mashup (mashup.mixedinkey.com) for Windows and Mac OS X, a new software application that lets you quickly and easily beatmatch two or more audio files, edit them, and save your results to a new audio file. Mashup uses Mixed In Key 5's harmonic algorithm to find compatible songs, and makes the process of mashup creation incredibly easy. "Our goal was to design software that could help you create a mashup in five minutes or less," says Mixed In Key's president Yakov Vorobyev. "We think that mashup creation should be easier than it is with Ableton Live."

Mashup's user interface is streamlined and intuitive. Import songs into Mashup, and it will analyze them for key and tempo. Next, drag a song into Mashup's ultra-fast audio editor, and its tempo will become the master for the project. If you'd prefer, you can manually enter in a different master tempo. As soon as one song is added, the song browser will show you which other songs in your collection are 100% harmonically compatible with your original song. Then drag other songs into the editor window, and they're automatically beat-matched to the master tempo, using Mashup's professional time-stretching algorithm.

Now you can start editing. Mashup lets you graphically edit each song's volume, as well as three bands of EQ, all with breakpoint-style automation. The editor also lets you select and silence portions of songs, adjust phase, slide them in time, and more. When you're done editing, you can export the result to a 320kbps MP3 file or a 16-bit, 44.1kHz WAV file.

If you already use Mixed In Key 5, Mashup will load its database and will skip the analysis step. Mashup and Mixed In Key 5 work flawlessly with each other.

Mashup is available for $39 and comes with free updates until Version 2.99.