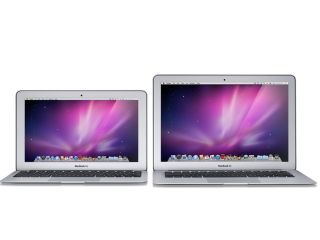 Take your pick from 11- and 13-inch MacBook Air models.

Apple claims to have "reinvented notebooks" with the launch of two new slim and lightweight MacBook Air models. These come in 13- and 11-inch sizes, and feature exclusively solid state flash storage. Neither model has an optical drive.

The 11-inch MacBook Air is probably about as close as you're ever going to get to an Apple netbook - in terms of size rather than price, obviously. It weighs 2.3 pounds and has an aluminium unibody enclosure. As standard, it has a 1.4GHz Intel Core 2 Duo processor, 2GB of RAM and either 64GB or 128GB of storage - you'll pay £849 for the entry-level model and £999 if you want the extra space.

We're sure many people will be tempted to buy a MacBook Air for music, particularly as the cheapest 11-inch model costs the same as an entry-level MacBook. Its slim size and fast-access solid state storage are appealing, though you don't get as much space for your money, and the processor is slower than the MacBook's too.

This being the case, the MacBook Air is probably best suited to the musician who does the majority of their work at home on a desktop machine but likes to dabble while on the move. If you buy one, you're not going to own the most practical Mac laptop on the market, but in terms of both looks and storage type, you'll certainly have the flashiest…