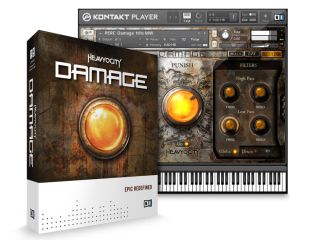 Featuring 700 beat-sliced percussive loops and 58 multisampled kits, Damage will be available in November priced at €299. Here's NI's official take on the release.

As the successor of Heavyocity's universally acclaimed "Evolve" series, DAMAGE was created over the course of two years involving unique recording and sound design techniques. The instrument is based on over 25,000 individual samples recorded in 24bit/96Kz using state-of-the-art equipment, resulting in 30 GB of source material. Sounds were captured in a variety of locations ranging from various high-end studios to a Connecticut junkyard, and comprise all possible types of percussion from traditional instruments to exploding cars and cranes dropping objects from great heights.

DAMAGE contains over 700 beat-sliced percussive loops as well as 58 multi-sampled kits, including an arsenal of unique "Damage Hits" for distinctive stings and transitions. Loop Menus can be mixed and matched easily to create complex layered rhythms, while Single Loops offer detailed playback control for intuitive sound tweaking. Certain kits are based on sophisticated ensemble-style recordings, with multiple velocity and round-robin layers, to provide true performance dynamics and a wide range of impact.

The sounds are complemented by a specifically designed effects section that includes the versatile new Trigger FX 2.0 real-time sound mangling suite as well as the central "Punish" knob for seamless increases in pressure and intensity. As a KONTAKT-powered instrument, DAMAGE offers all relevant playback and sound shaping functionality through the free KONTAKT PLAYER software. All sounds can also be loaded into the full version of the KONTAKT 5 sampler for advanced sound editing.

DAMAGE will be available in November for a suggested retail price of $339 / 299 EUR.