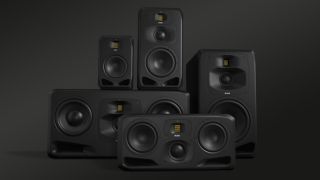 NAMM 2017: Adam Audio has dropped the third generation of its flagship range, the S series.

The new line up includes the S2V nearfields, followed by the S3H and S3V midfield monitors and topping the range are the larger S5V and S5H.

The iteration of the S series features completely new woofers and mid-range drivers, newly designed waveguides for the S Series tweeter (and the mid-range driver on the S5 models), and a new DSP engine which provides crossover optimisation, voicing options and expansion potential.

"Under its new management, Adam Audio has re-energised every aspect of the company, and our R&D team has been working behind closed doors to create this 3rd generation S Series line," says David Angress, Chairman of Adam Audio. "We have employed best engineering practices, modern materials technology and advanced DSP to create the new S Series, a range of studio monitors that offer stunning clarity and low distortion, utilising new woofers and midrange drivers and the S-ART tweeter - an even more precise version of Adam Audio's famous hand-built tweeter."

We have no word on prices as yet, but the S Series line will be available in February 2017. For a full rundown on specs, check out the Adam Audio website.