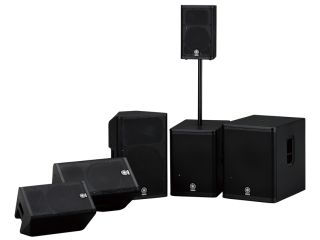 The DXR series comprises four full-range models - the DXR8, DXR10, DXR12 and DXR15, complemented by the DXS12 and DXS15 active subs. All featuring a highly compact and versatile design, suitable for a wide range of applications where class-leading sound pressure levels and high-definition sound are essential.

In the development of this new range, Yamaha collaborated with loudspeaker giant NEXO, whose insight and expertise as an industry leader in touring-grade sound reinforcement ensured that the DXR and DXS series deliver the ultimate in portable sound.

The DXR series features Yamaha's proprietary FIR-X tuning™, which achieves superior clarity and imaging than is possible with regular crossovers. D-CONTOUR dynamic multi-band processing is also employed for clear, powerful and consistent sound throughout all output levels. Two settings are provided - FOH/MAIN or MONITOR - optimising the loudspeaker for front of house or monitoring applications.

The DXS series subwoofers include powerful D-XSUB processing and exclusive DSP presets for highly flexible control of the low end. Yamaha's innovative DSP also provides tour-proven protection functions, which ensure all the vital components perform at their maximum potential, even after extended periods of use.

Rugged, non-resonant ABS enclosures on all models are designed to allow seamless adaptability in a wide range of applications - from front of house or stage monitoring for bands, solo musicians and DJs to installation in commercial and public premises, churches and schools.

The DXR series is equipped with rigging points compatible with standard eyebolts, while optional U-brackets are also available for horizontal and vertical mounting. The series also features a dual-angle pole mount socket, three-channel onboard mixer, flexible IN/OUT connectivity and linking capability. This allows DXR loudspeakers to make up a full sound reinforcement system alone or seamlessly integrate into a setup with DSR or DXS Series speakers.

"Working with NEXO was an obvious step in taking the DXR and DXS ranges to the highest level of performance. Liaising closely with their engineers at their state-of-the-art facility greatly contributed to the astonishing SPL and unmatched reliability of these new loudspeakers," says Toshiaki Kamiya, Engineering Manager, Speakers & Amplifiers Group, Yamaha Pro Audio Division.

"By combining Yamaha's signal processing, acoustic and amplifier technologies with NEXO's invaluable insight and experience of loudspeaker design, we have not only extended our ranges of high-power, professional active speakers, but we have also made a significant addition to our overall portfolio of pro audio solutions," adds Kazunori Kobayashi, General Manager of Yamaha's Pro Audio Division.

The new DXR and DXS Series will be on show at Yamaha's NAMM 2012 stand 6528 in Hall A of the Anaheim Convention Center, California from 19th - 21st January and will be available from this month.