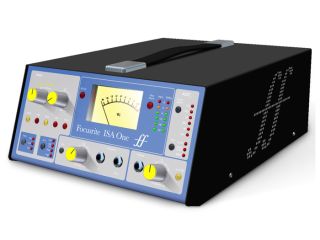 The ISA One is designed to be "rugged and portable".

Focusrite has unveiled a new single-channel preamp, the ISA One. This transformer-based device takes its lead from the company's ISA110 preamp and offers a range of eye-catching features.

This DI channel should prove useful for people who want to blend a DI'd guitar signal with a mic'd guitar cabinet.

Other features of the ISA One include an insert point (so that extra processing can be added), phantom power and a high-pass filter. There's independent input metering, plus a headphone output with a dedicated volume control.

A stereo, 24-bit/192kHz A-D converter will be offered as an optional extra.

The price of the ISA is to be confirmed, but we're assured that it will be "groundbreaking" for a product of its type. Expect to see the device shipping in the first quarter of 2008.

You can find out more at the Focusrite website.