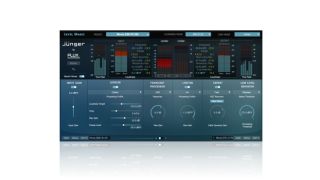 Immense metering is onboard this loudness plugin

Loudness is a big deal in modern music and broadcast audio - so big that there's an entire bureaucracy behind it. Junger Audio Level Magic aims to give you a massive amount of control over loudness and metering, specifically in the context of various broadcast compliance standards. Sexy, right?

What you get is a clinical chain of processors - Input/output gain, Leveler, Transient Processor, Limiter, and 'Low Level Behaviour', which the developer says act "without coloration, pumping, breathing, distortion or modulation effects sometimes associated with this type of processors."

You also get insanely comprehensive metering, so now you too can achieve audio results compliant with such broadcast standards as the venerable EBU R128, the classic ATSC A/85, everyone's favourite ARIB TR-B32, and newboy FREE TV OP-59.

While it's not a 'creative mixing' plugin, the point of the release is that the software is now DAW-integrated, running in 32-/64-bit versions, and supporting AU/VST/AXX/RTAS operation. In terms of music making, this may only float the boat of mastering engineers, but ti'll be well worth checking out to anyone who understood the above paragraph.

Go check it out at the Flux:: website, where it'll set you back $860, with various buying and licencing options.