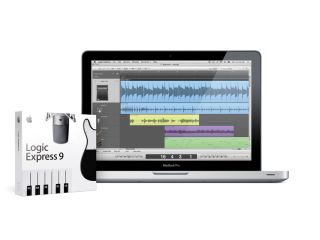 Logic Express 9: do you need anything more? (Image credit: Image courtesy of Apple)

Apple's new version of Logic Studio is a fine update to an already comprehensive music production package, but if you're a Mac user with a little less money to spend on software, it should interest you to learn that Logic Express 9 is now shipping.

This cutdown package doesn't come with MainStage, Soundtrack Pro or some of Logic Studio's high-spec plug-ins (Sculpture and Space Designer), but the Express app itself looks remarkably similar to Logic Pro 9, which we profiled in detail last week.

All the headline new features are in place - the likes of Flex Time, Amp Designer and Pedalboard - and GarageBand users are assured that their projects will open without complaint.

At just £159/$199, Logic Express 9 seems like a no-brainer for Mac musicians who are looking to upgrade from the software that shipped with their computer, and also worth considering for anyone who feels that the Logic Studio bundle (which retails for $499/£399) contains quite a lot of stuff that they simply won't use.

It's available now in the US, while UK users who order it now should receive it within a couple of weeks.