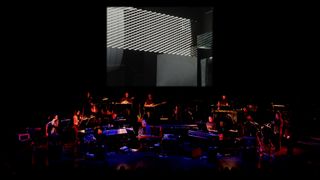 Icebreaker: dedicated to the craft.

Popular demand for all things Kraftwerk will continue in the new year, as contemporary music ensemble Icebreaker embark on a live show that aims to recreate the electronic band's experimental early period.

The tour kicks off at the London Science Museum on 24 January and is titled Kraftwerk Uncovered - A Future Past.

Announcing the concept, German composer, producer and sound-scapist J. Peter Schwalm said: "Our focus is on Kraftwerk's early, semi-improvised music that combined acoustic and electronic instruments, [and that period's] relationship to their career-defining albums from Trans Europa Express to Computer World.

"Where Kraftwerk's aesthetic moved ever closer to the 'man machine' we aim to adopt a more 'retro-futurist' approach to find the 'human' inside the machine, beginning with Ralf Hütter and Florian Schneider's own early albums".

The tour dates are: