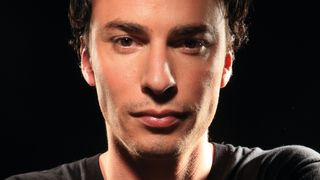 "When I was 14 years old, I was at a school party and I heard a record called Can You Party," remembers Dutch DJ/producer Gregor Salto. "It was a Todd Terry production by Royal House, but I had no idea who Todd Terry was, and I had no idea what house music was. All I knew was that I'd seen my future - I was going to make records that sounded like Can You Party."

Salto can't help but laugh at the naïve bravado of that 14-year-old kid.

"I liked disco music and I studied classical piano, but that was the full extent of my talent. What equipment did I need? How do you even write a song like that? Where do the notes go? When you're 14, things like that don't matter. You just jump in and hope for the best."

Duetting with his mate, Spanish producer Dr Kucho!, he scored a massive Dutch hit with Can't Stop Playing in 2005. Salto had arrived!

The ensuing ten years have been... busy. As well as headlining every major show from Miami to Ibiza, he set up his own label, collaborated with Fatboy Slim and remixed the likes of Rihanna, Rita Ora, Mariah Carey and Jennifer Lopez. And did we mention the Grammy nomination for Echa Pa'lla, the track he did with Pitbull? Oh, and just in case you missed it first time around, Can't Stop Playing was re-released last year - remixed by Salto and Oliver Heldens - and suddenly found itself in the UK Top Five.

Whose idea was it to re-release Can't Stop Playing, and did you think it'd be an even bigger hit second time around than the first?

"I've always known that Can't Stop Playing is a great track, but it's not a good idea to sit around thinking, 'Yeah, this track is going to be a hit,' because you never know how people are going to react. Luckily, people still seem to like it.

"The re-release was sort of Oliver Heldens' idea. He was keen on doing a remix, we got together and, yeah, it turned out pretty good. What I really like is that we've managed to bring the song up to date, but still keep some of that original spirit. It's a song that was definitely influenced by the music I was listening to back in the late 80s: house, funk, disco... [laughs] It made me feel like I was 14 all over again!"

You studied classical piano as a kid, and this is a subject that regularly comes up for discussion in Computer Music do you need to know how to play an instrument to make great dance music?

"For me, personally... yes, it helped. 100%! Without the piano lessons that my mom paid for, I wouldn't be doing what I'm doing today. But that's only a personal opinion. Do you need to know how to play an instrument to make dance music? Not at all - I've worked with producers who can't play a note, and they're making some of the most groundbreaking dance music of the last ten years.

"Sometimes, the more you know - the more technical knowledge - the more it limits you. I've collaborated with people who've studied at the world's top conservatories, and they just can't get their head around the simplicity of an idea. They say, 'Oh, this is only two chords. It's easy. It's boring.' They overcomplicate everything, but dance music doesn't work like that. The pioneers - the people who've really pushed dance music forward - generally don't come from a classical music background, because they're the ones who can understand the simple beauty of an idea that works on the dancefloor. You don't need 27 different chords to make people dance!"

So being formally taught how to make music helped you. In what way?

"It gave me a disciplined approach to music. My mom said, 'As long as you practice, I'll pay for your lessons. If you don't practice, you have to pay.' That gave me the incentive to work hard, and eventually, I started to see the results. It doesn't happen overnight, but if you work at something, you'll get better. As a kid, that's a great lesson to learn.

"Musically, it also helped because I can sit at a keyboard and I can play. If I think of a hook, my fingers will play what's in my head. Like I said before, this is only a personal opinion, and I'll admit that it doesn't always work. I was sitting with a friend of mine recently, trying to work out a melody line... it wasn't happening. My friend, who doesn't play any instrument, just went bang-bang-bang on the keyboard and I was like, 'Man, how did you come up with that?' Technical knowledge alone will not create great music. There also has to be a bit of... craziness."

What was your early setup?

"I guess I was lucky because my dad was always interested in computers. We had a Commodore 64, then an Amiga. Messing around with those computers and some of the early tracker programs introduced me to the idea that the computer could be the centre of your studio.

"My school friend and I actually won a competition at school, and they gave us the money to buy an Atari, a sampler, a Roland JV-880, a mixing desk and a keyboard. Can you believe that? They bought the equipment for us! I eventually moved up to PC, but that was kind of the basic setup for a long time; it was all outside the box; it was hardware."

All that equipment must have blown your minds.

"You know something? I was never that happy with the sound that I was getting. I'm not a technical guy, and I found the hardware difficult to grasp. Let me give you an example: compression. I bought an Alesis 3630 - which is regarded as a pretty good compressor - and, to be honest, I couldn't hear any difference. I knew compression was supposed to make my music sound better, but I turned all the knobs and played with the settings, and nothing happened. I'd spent all this money for nothing."

You're probably not alone there. Hands up anyone who's bought a compressor, stared at it for three days then put it back in the box and hidden it under the bed!

"Yeah, but this is the strange thing... when I moved on-board, compression suddenly made a lot more sense because I could hear what it was doing. When I first met my good friend

"Maybe it was psychological? Maybe it was because the Alesis compressor looked so... complex? Maybe I just didn't push the right buttons? With Logic, the pieces all began to fall into place. 'Ah, so that's what compression does. And that's the best way to use EQ.' I went totally in the box. I suppose it was the same journey for so many people.

So you've switched to a hardware/ analogue setup?

"No! I'm still very much a Logic fan, but I have got a couple of hardware toys that I can make use of. The Roland Juno-106 is good for basses. Via friends of mine, I've got access to a Memorymoog and a Minimoog. And there's a real Wurlitzer in the studio. If I just need a Rhodes or Wurlitzer background sound,

I'm happy to use Logic's EVP88, but if I'm working on a full-on bossa nova track with the piano right out front, I'll always reach for the real thing."

Is it a bit of a cliché to say that Latin and African rhythms are generally more... "sophisticated" than the average house beat?

"It probably takes a bit longer to put together a good Latin groove, simply because it's usually made up of more parts. There might be a bit of a loop, a few samples, a live percussionist and some live percussion played by me. I'm not a great percussion player, and I sometimes find that my bad timing adds a really nice human feel. Obviously, if you go too far from the beat, it just sounds like you've got a really bad percussionist!

"But to call it more 'sophisticated' than a house beat is not true. If you listen to a Disclosure track - a band who I believe are really at the forefront of what's happening in dance music right now - their beats are pretty simple, but they are so smart and so clever.

"Like I said before, complexity does not necessarily make something good!"

What about beatmaking on the computer? Is there any software that you couldn't live without?

"Sonic Charge's Microtonic... the Kicksynth and Kickstart by Nicky Romero. I wish I didn't spend so much time on the kicks, but I guess it has to be right. I'm lucky enough to be able to play out my track when I'm gigging, and the kick is always the thing that bugs me. Sometimes, I might do 90 or a 100 different versions of a song."

100 versions! How do you deal with them all?

You've been asked to remix some seriously big names over the years. Do you approach a Rihanna or Mariah Carey remix just the same as you would any other remix?

"I'd love to say, yes, but... you have to be practical. Look, I live in Holland, and we have a pretty mature dance scene over here. We're used to a lot of different styles and sub-genres, and I know that I can go way over into the leftfield with a remix for that kind of audience.

"But if a major label comes to me, looking for a remix that they can play out in the Las Vegas clubs, I know they're looking for a particular kind of sound. Sure, I could try and be super-cool, but if they're not going to play it, what's the point?"

You've been running the G-Rex label since 2001. Did you start that simply as a way of getting your music out there?

"Kind of. I'd already released stuff on other labels, but I eventually found myself having meetings with A&R men who were telling me that my track wouldn't work in a club. I was like, 'What are you talking about? I played it at a club last night and the place went crazy.' To save having to have meetings with more idiots, I decided to set up my own label."

Does that mean you're now the A&R man? Telling someone that their track won't work in a club?

"[Laughs] Yeah, I've been there! And I'm pretty sure people have sat across the table from me thinking, 'This guy's an idiot. He doesn't know what he's talking about!' Hopefully, some of the time, I can give people the right advice.