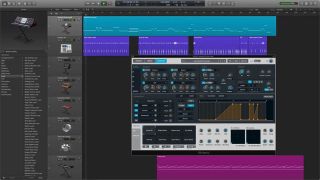 Logic 10.2 was announced last night with a flurry of bug fixes and workflow enhancements, but the big noise is all about Alchemy.

Back in February Camel Audio shut up shop, with whispers that it had been bought up by Apple. Fast forward to June and an updated Garageband featured a Transform Pad, formerly the 'Remix-Pad' from Alchemy. So while it wasn't a surprise to see that Alchemy has been included in this latest update to Logic, we're overjoyed to see it alive and kicking.

It's not all about the reemergence of Camel Audio's ever popular soft synth, however. There are tons of new fixes and enhancements. So without further ado, here are the top 11 things we have learned about Logic 10.2 and Alchemy.

Previous Alchemy users will no doubt notice the different GUI. There was no way Apple would allow drop-shadows and gradients - it's just not logical.

Enhancements to Smart Controls mean that you are now able to control two instruments simultaneously, no doubt to incorporate the two X/Y pads in Alchemy.

Apple Music meets Logic with the ability to upload projects direct from the app to your Apple Music Connect page, should you have one. This could be the seamless and free publishing avenue you've been waiting for.

Don't worry, the inclusion of Alchemy hasn't killed off the EXS24 just yet. It's still there, and Apple believe it is the perfect partner for Alchemy. You can use your EXS24 files as the basis for patches in Alchemy.

We think it would've been fine to just have Alchemy included in Logic with no new functionality, but of course there are some tweaks. Most notable is the inclusion of a keyword browse function, where you can choose from over 3000 preset sounds.

We still love the price compared to many other DAWs on the market today. Spare a thought for the fact that Alchemy alone was originally retailing for £179 and Logic Pro still comes in at only £149!

7. Even more bang for your buck

The Apple Loops library has been expanded with the inclusion of 1,000 new loops from a variety of popular instruments and genres including EDM, Hip Hop, Indie, Disco, Funk, and Blues.

Those lovely little track icons are great, but what if you could choose your own? Well you can now. Just drag and drop any image you like onto the track icon and Logic will resize it for you.

The new comping function makes life easier when recording multiple takes. Each looped take in cycle-mode will produce an entirely new track with the same channel strip. The 'old' comping method - while genius - was perhaps a little too clever for its own good. Let's just keep things nice 'n' simple, eh?

10. The second update in just over six months

Not really a new feature in Logic, but it is certainly worth noting that Apple have updated Logic for the second time in just over six months and all the indications are that they intend to keep the new features coming. Good news. The Cupertino company DO care about their flagship DAW.

11. Support for the Force Touch Pad

We've seen Apple's Force Touch Pad introduced on its latest books and now 10.2 supports the new hardware. So what will this mean for Logic Pro? Well, as the new pads can detect differences in pressure, this may set the ball rolling for velocity-sensitive editing via the touch pad. Could be very handy when using the Piano Roll Editor. One for 10.3 maybe?