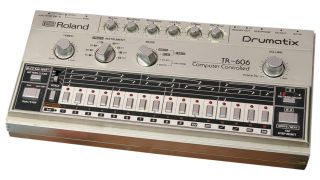 Roland has announced that it will be adding the TR-606 add-on to its 7X7 expansion pack for the TR-8.

There's very little flesh on the bones of yesterday's announcement - on 6/06 day, naturally - which states that the add-on will be coming soon. As it is part of the existing 7X7 expansion, it is unclear whether existing owners will be offered the 606 sounds for free, or at extra cost.

Keep your eyes peeled for more news on the Roland Aira website.

If you can't wait to get stuck into some drumatix action, then perhaps consider Monade Sounds' Pure606 plugin. This is a sampled-based emulation of the 1981 classic, which features sounds recorded at 24-bit/44.1kHz quality.

Pure606 is available now for just $12. To buy and for more information, check out the Monade Sounds website.