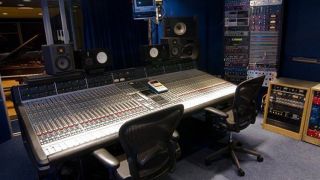 A piece of music history: the SSL 4048 E Series console from Sarm Studio 2

Want to own a piece of music history, not to mention one of the coolest and best-sounding mixing consoles on the planet? Here's your chance. A 1983 SSL 4048 E Series console from Studio 2 in producer Trevor Horn's London-based Sarm Studios is up for grabs on eBay.

For the past three decades, Studio 2 has been one of the most coveted rooms around with artists such as the Pet Shop Boys, Metallica, Alicia Keys, Blur, The Kaiser Chiefs, Mark Ronson, George Michael, Frankie Goes To Hollywood, Coldplay, Pharrell Williams, Shakira, Rihanna coming through its doors.