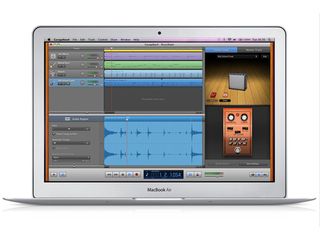 GarageBand '11 ships with every new Mac.

In terms of installed user base, GarageBand is probably the most popular DAW in the world right now, and according to MusicRadar users, one of the best.

This being the case, the release of a new version is pretty big news. GarageBand '11 arrived late last month as part of the iLife '11 bundle, and with it came a range of additional musician-friendly features. Let's take a look at what's new.

Pulled out of Apple's Logic applications, this lets you change the timing of your audio recordings/samples. Using it is easy: double-click the audio file you want to edit to show its waveform display, then click and drag at the start of the note/beat you wish to move backward or forward, and lengthen or shorten it by clicking and dragging at the end.

Changes you make sound impressively natural, though Flex Time does work best with monophonic material. It's also worth noting that adjustments are non-destructive - just click the Flex Time button to toggle between the edited and unedited versions of the file.

Another present from Logic, this enables you to lock one or more of your tracks to the user-selected Groove Track. This can be any of your recorded tracks - just position your mouse pointer over the appropriate track icon and click the star button that appears.

Once you've done this, GarageBand will extract the track's groove and apply it to all the other material in your song. You can then deselect the tracks that you don't want to be Groove Matched.

The usefulness of this feature will really depend on the type of music you make. If it's straight-ahead 4/4 rock or dance and you want the majority of the arrangement to lock to the beat, Groove Matching works well, but if you've got lots of syncopated elements that are following slightly different rhythmic paths, you won't use it so often.

It certainly works as promised, though, and again, the implementation makes it dead easy to use.

NEXT: New amps and effects and How Did I Play?

The previous '09 update saw GarageBand adding much-improved guitar amp/stompbox technology, and this has been extended this time around. Seven new amps - seemingly based on classic models by the likes of Fender, Marshall, Mesa Boogie, Orange and Hiwatt - bring the total number available up to 12, and there are five additional stompboxes.

A decent selection of 'rig' presets is supplied, but you can mix and match the amps and stompboxes as you wish. Overall, we think the modelling is pretty good; in fact, the majority of GarageBand-using guitarists will probably be satisfied enough not to invest in any third-party software.

New Lessons… and How Did I Play?

We praised the quality of GarageBand's Learn To Play features when they were introduced as part of GarageBand '09, and they've been expanded here.

First and foremost, there are 22 new guitar and piano lessons in contemporary and (in the case of the piano) classical styles. They're as effective as ever, but what gives them an extra dimension is the How Did I Play? option.

Basically, this marks your performances as you perform. You get visual feedback on whether or not you're hitting the right notes at the right times, and a constantly updating percentage score at the bottom left of the screen gives the whole thing a video game type feel.

This is smart thinking on Apple's part - the motivation to beat your previous score does keep you practising. There's even a graph so that you can see how much you're improving (or not) - if Apple can get the Guitar Hero generation interested in using this feature, it might really make a difference to the number of people who can play an instrument competently.

NEXT: GarageBand '11 summed up

We're pleased to see that Apple has added something for producers in this GarageBand update: the Flex Time and Groove Matching features are impressive, and if you record a lot of live instruments, might be enough to convince you that this iteration of iLife is a must-buy. It's great to see technology like this in entry-level software.

The new amps and stomps are very welcome too - Apple might even like to consider putting these into a standalone iLife app for guitarists who want to use them live - and any Mac owner who wants to learn to play either the guitar or piano should check out GarageBand immediately.

On the downside, in some senses GarageBand remains a very 'traditional' DAW. The supplied loops and sounds are far from cutting edge and the sequencing totally linear. This being the case, it remains more suited to people who simply want to record their songs than those who demand that their music software is also a source of inspiration.

But as always, the bottom line is that this is an app that ships with all new Macs or is available as part of a £45 software suite. When you factor that in, GarageBand '11 looks very impressive indeed.