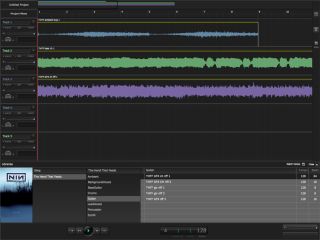 DigiMix is one of the most elegant online music-making solutions yet seen.

We've already seen a Reason-style online music-making application in the shape of the Hobnox Audiotool, and now we have DigiMix - a browser-based mixing application that bears many of the hallmarks of a traditional DAW.

Currently in the early stages of development (the latest release is an Alpha build), DigiMix has a similar look and feel to Apple's GarageBand and enables you to drag loops from a browser into an arrangement. You can apply effects to your loops and automate their volumes.

At the moment, you can only use the loops that come supplied - these are all taken from Nine Inch Nails' The Hand That Feeds - but in the future, the developers plan to let you import your own. What's more, there's a Match Tempo facility, so presumably, any audio you drag in will be automatically fitted to the current bpm. Finished projects can be saved or bounced down as stereo audio files.

First impressions of DigiMix are very favourable indeed - MusicRadar heartily encourages you to give it a try. It's by no means the finished article, but it provides further evidence that online music-making software has the potential to be massive.