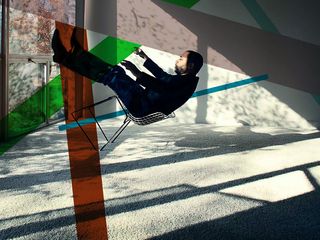 Carl Craig: that looks like it's going to end painfully.

A legendary figure in the world of techno, Carl Craig was a pioneer of using computers to make music. So who better to talk to about creating bomb beats and building beautiful basslines?

Check out the interview below; for more producer chat - including interviews with Skrillex, Noisia, Steve Lawler and more - and tutorials, check out the 50th issue of Computer Music Specials - Beats & Bass: The Producer's Guide - which is on sale now.

If you were approaching a project with a blank canvas, what would be your 'go-to' gear for putting beats or basslines together?

"The MPC-3000 is kinda my starting point. If I like a sound and want to start looping it or sampling it to get some inspiration, I'll put it over the pads and tap it out. Maybe the results won't eventually be used, but it might inspire me to go to a keyboard and play it into Logic.

"I have an affinity for samplers probably even more than I do for synthesizers. I think of myself as a little bit of a sampler collector, which maybe stems from the days when it was pretty much the only gear I owned - I had a sampler, a sequencer and a Prophet 600, and I had to make the best out of them. So, I always go back to a sampler.

"Native Instruments' Maschine is great too, as it's the next step on from my MPC. You can take a beat or a bassline and really morph the hell out of it inside Maschine."

Are we maybe guilty of not working our software quite as hard as we used to work our hardware gear?

"Definitely. I recently got to the point where I had to tell myself that I'm not interested in owning new gear any more as I was just buying too much of it. You do exactly the same thing with plug-ins, and I even do it with buying iPad apps on iTunes. They're nickel-and-dime-ing us with that stuff. There's new stuff to spend your money on every day, and you convince yourself that you have to have it - even if you know you'll end up not using it!

"I recently bought an M-Audio Axiom Pro, and it's made that all even more apparent to me. I've become aware of so many more things Logic can do than when I was just using a mouse and the cursor. It's really shown me just how much there is within Logic as a program that I didn't know, and I realised that I needed to go back, sit down and learn the possibilities of this software that I've owned for the last five years.

"Also, every classic synth I ever wanted I can now have loaded onto my laptop within Logic."

Are there any of Logic's bundled soft synths or plug-ins that you would go to for creating loops?

"I really like the ES1 because it's just incredibly simple. I met Dave Smith recently, and I told him that the best synth he ever made was the SCI Pro One because it was so simple - you had two oscillators, and that was it.

"I'm a firm believer that a lot of the best creativity comes from restriction. I took a music synthesis production class when I was about 18 years old, and that's how I learnt about synths, on a Minimoog. I sat for hours and hours just teaching myself things and learning. These days you have so many plug-ins, and you want to use all of them, so you end up never truly learning any of them."

Are there any iOS apps out there that you would use during the beat-making process?

"I really like the Korg ones, the iMS-20 and iElectribe in particular. I've used the Electribe when I've been DJing for making basslines and sequences on the fly. I was using TouchOSC for controlling Ableton for a little while too.

"I also tried to get Griid up and running, but I didn't realise that you had to go into your main profile to set it up rather than accessing it via your second profile, so I couldn't quite get it to work. I think the guy who was helping me out over the phone thought I was a complete fool!"

What's the best advice you could give on creating beats and basslines?

"Improvise as much as possible. When you're using Logic or the other DAWs, you're basically just looking at bars and waves and often you're not necessarily listening to the music. I watched one producer show how he does his remixes, and he just takes a kick drum from another remix that he did in Logic and pastes it into a new session - it's kinda like painting by numbers!

"It's so easy to get into that. It's an art in itself to do it that way, but Jackson Pollock didn't paint by numbers - he went for it."

Check out 20 F@#&ING Years - We Ain't Dead Yet, a compilation of the best from Craig's Planet-E label.