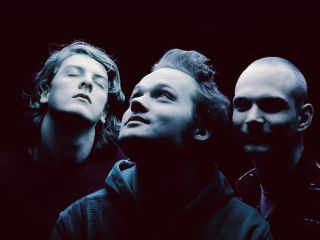 Noisia: "you have to find your own methods for making sounds".

Check out the interview below; for more producer chat - including interviews with Skrillex, Carl Craig, Steve Lawler and more - and tutorials, check out the 50th issue of Computer Music Specials - Beats & Bass: The Producer's Guide - which is on sale now.

What software is in the Noisia armoury for building your beats and basslines?

MVS: "We use Cubase for almost everything. For drums we like to use Superior Drummer as well as one-hit sample libraries or even synth-based drums. We create our sounds using several soft synths and plug-in chains and save them to folders that we categorise by month. Then, when we work on a track, we can dig into these folders and grab beats, basses and other sounds."

Do you all use the same software setup?

NR: "We might not all use the same plug-ins all the time, but we work on the same setup and workstation, so we mostly do use the same stuff.

Is there a set Noisia methodology?

MVS: "Not really - we go through phases of using certain sets of plug-ins. We love to work with little pieces of audio, since you can see what you hear and make sure the transients and other elements are exactly right."

We've had your track, Machine Gun, on repeat for about a month. Talk us through how you created its intense rhythms.

TDV: "The basic groove in Machine Gun isn't very complicated, and we just took a while to make it sound the way it does through listening and adjusting. At one point we felt that something needed to happen in the track for it not to get boring or too continuous. We tried creating a much faster-sounding part without changing the BPM of the track but by reintroducing some of the elements in a different rhythm, so that it sounds just like drum 'n' bass while the bassline is still playing at (I believe) 128bpm with the drums running on top of it in a triplet pattern.

"After this section we felt we had to go back to the original tempo, but switch the groove up. We're really happy it turned out the way we wanted - these kinds of experiments don't always end up sounding like they're supposed to."

NR: "Probably. With DnB there's usually no deeper meaning to the track than how it comes across sonically, so it can make a huge difference if you are able to recognise that a tiny little edit can make or break an impact moment in a track.

Is there anything you'd like to be able to do with music software that it currently won't let you do?

MVS: "There are some little things that can't be done or are harder to do within the software we use, but as far as I know, those things are possible in other programs. However, those programs will not let us do things that we are currently able to do now.

"It would be nice to have multiband sidechaining or the ability to assign LFOs and envelopes to any automation lane in Cubase, which we've heard is possible in Ableton Live."

TDV: "I don't think tricks are the most important thing in this kind of music - you have to find your own methods for making sounds, and there are a nearly limitless number of ways to do that. What does matter is that when you start combining the elements, you have to make sure you're combining the right sounds for the right track.

"It might sound obvious, but if you have a sick bass sound, you can easily make it sound pretty worthless by adding a crappy drum loop. Work on a loop as a whole, and make all the elements sound right together."

What's next for Noisia?

NR: "Well, we are currently in the middle of negotiations for partially scoring a big video game, and we're making new Noisia tracks and collaborating with people like Phace and the Foreign Beggars. We're also doing some production work under our Nightwatch moniker for various artists, including Dutch rapper Kraantje Pappie's debut album."

Machine Gun, from Noisia's debut album Split The Atom, was used in a trailer for the recent blockbuster Transformers 3.