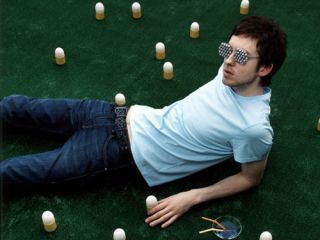 Calvin's not so relaxed now he's lost his laptop.

UK readers will know all about the chaos that´s been engulfing Heathrow Airport´s new Terminal 5, but spare a special thought for Scottish producer/artist Calvin Harris. He´s revealed that baggage handlers at the new terminal managed to lose his laptop, which contained seven months´ worth of work for his new album.

Now, we don´t want to kick Calvin when he´s down, but we have to ask: what on earth was he doing checking in a music-filled laptop when he hadn´t backed up all his essential data?

Even if you aren´t planning to jet around the world with your notebook, you should make a point of archiving everything that you might ever need in the future. Sadly, hard drive crashes remain common, and you can never rule out that possibility that your computer might be stolen.

So, for the benefit of Calvin - and anyone else who records music on a computer - here´s a checklist of everything you need to keep backed up:

- ROMpler and sampler sound banks. If the original disc sets become unreadable for any reason, a large number of projects could be affected.

- Any pay-per-download software you´ve bought. Don´t forget to include a text file with any necessary serial numbers or registration codes - the software company you bought from may not be in business in two years time. If you rely heavily on any free software or plug-ins, back these up too, as they may not be available in the future.

- Plug-in preset or bank files you have bought, downloaded or programmed yourself.

- Loops and sample collections. Even if you have copies of most of the files on discs, you´ll need to preserve file locations and the overall library directory structure. Otherwise, existing projects may fail to load correctly.

- Periodically make a Zip file of your plug-in folder - later versions of plug-ins may not sound exactly the same, or you may at a later date decide to delete a plug-in which you no longer use, forgetting it was used in previous projects.

If your computer is used for other tasks besides making music, don´t forget to back up:

- Email messages and your address book.