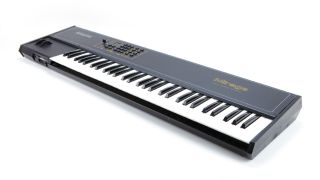 Ah, the '80s! A decade drenched in hairspray and carried aloft on the padded shoulders of the first wave of MTV video idols. New wave and synth-pop ruled the airwaves, and hip-hop was maturing into a serious artform thanks in no small part to the democratisation of sampling technology.

Before Ensoniq hit the scene with its Mirage keyboard, sampling was restricted to moneyed pop stars and the lofty environs of the professional studio. Fairlights cost upwards of £18k, and "affordable" samplers like E-MU's Emulator were a mere £8000! The Mirage, at £1695, put sampling within reach of the average musician.

The Mirage was Ensoniq's first product, released ahead of their intended debut, the ESQ-1 synthesiser, to capitalise on the then-burgeoning sampling craze. However, it shared with that synth the one-two punch of gritty 8-bit digital oscillators combined with tried-and-true Curtis-based analogue filters.

The groundbreaking price point of the Mirage was achieved by custom chip design and cost-cutting measures. The latter included an infuriating two-digit hexadecimal display - only the slightest step up from editing samples entirely by ear. Sample resolution was restricted to a paltry eight bits, and the sampling frequency topped out at 33kHz; onboard memory was a tiny 128KB. Samples could be saved and recalled using the built-in 3.5-inch floppy drive, assuming you'd stocked up on compatible disks or plumped for the optional MASOS operating system that allowed you to format your own. The MASOS system was crucial if you planned on performing any advanced sampling functions.

Not that you had to, mind. Ensoniq provided a comprehensive library of prefab samples, and more than a few users were pleased to pony up for a Mirage just to get some "realistic" acoustic tones under their fingers - remember, this was before such things were commonplace. And, thanks to the Mirage's lovely 24dB resonant filter and five-stage envelopes, you could wring quite a lot from those factory sounds.

If you dared to dive into the Mirage's deceptively deep architecture, you'd have been able to tap a third-party editor such as Blank Software's Alchemy - a much better option than the Mirage's myriad buttons and awful display. Interestingly, the Mirage's OS was loaded from floppy disk, meaning that the operating system could be improved or even replaced very easily. To this day, a Mirage owner can still grab the alternative SoundProcess disks that turn the instrument into a multitimbral wavetable synth.

At the time, the Mirage was a compromise. However, its characterful lo-fi sound would eventually become sought after by producers looking for an alternative to 24-bit/96kHz perfection, and analogue aficionados would come to appreciate that squelchy filter.

That isn't to say that you need scour the classifieds for a secondhand Mirage. Most of today's virtual samplers offer bit reduction to help you reclaim that old-school cool without the hassles - and there's even a virtual Mirage, 112dB's Morgana, should you want one.

Taking inspiration from the Mirage, Morgana brings the feel and sound of 8-bit hardware samplers to the desktop, but without the limited RAM or clunky interface. Dual five-stage envelopes, a 24dB filter and support for WAV, AIFF and ReCycle formats round out this cross-platform package. At £111.46, it's slightly less than a secondhand Mirage!

Though not a Mirage emulation (or even a sampler), this 32-bit Windows plugin will put the Ensoniq sound into your VST host for free. Based on the Mirage's wavetable synth sibling, it combines lo-fi digital oscillators with a classic four-pole filter for a crunchy 80s tone. Crispy tuned percussion and bit-reduced bells are a speciality.

The simplest way to approach the sound of the Mirage in your DAW is to apply a bitcrusher effect, to simulate the effects of recording with low sample rates and reduced bit depths. Your DAW may have one, but if not, grab this freebie from Togu Audio Line. Wrap it around a ROMpler for instant lo-fi grit and gratification.