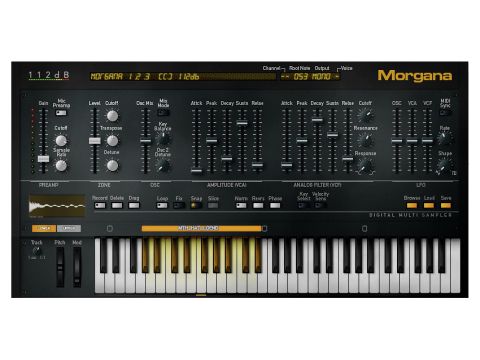 Morgana feels and sounds like a hardware sampler, and will help you to rediscover old techniques.

We're now so used to soft samplers being presented as vast pre-loaded ROMplers that it's all too easy to forget about the bad old days of hardware samplers, when you'd be lucky if yours came with just a few floppy disks of ready-to-go sounds.

Back then, it was entirely expected that you'd be willing to go to the effort of manually recording your own sounds before editing them on a tiny LCD display.

Crucially, and entirely unlike today's samplers, the sounds that came out of those old-school units were often significantly different to the ones that went in. The bass was grittier and the top-end was less well-represented. There was hiss, there was analogue degradation from the circuitry, and everything was generally distorted, though often in a pleasingly organic way.

Until now, there hasn't really been a reliable way of emulating this combined effect, but now we have Morgana the debut VST/AU instrument from 112dB.

The idea is simple: deliver a soft sampler that recreates the aged analogue and primitive digital circuitry of the late '70s and '80s to form a musically expressive instrument for both studio and live use, but with a much handier editing interface and full automation control, and none of the memory constraints of yesteryear.

First impressions are that it's mission accomplished for 112dB. The simplicity of Morgana's front panel is hugely appreciated; unlike many of the hardware samplers we grew up with (or soft synths we've subsequently embraced) this one really does feel like a nice, ergonomic analogue synth.

Taken as a piece of virtual hardware, the controls are well laid out (and enable fine control when holding down Shift), making it incredibly easy to edit patches or individual samples.

The help menus that open automatically when you hover a parameter long enough give you handy tips about the extra range and routing parameters that lie behind the scenes. However, an optional routing matrix would be a welcome addition at some point.

As for the sample patch architecture, it's all pretty standard stuff. You put samples in, tell the sampler which notes to place them on, set their start, end and loop points, tune them, and that's about it. You can also create a patch with distinct upper- and lower-level multitimbral patches, which you can then blend into one über-patch.

Absolutely the best thing about Morgana, though, is its sound. 112dB have gone to great lengths to replicate not just the low-quality chips used in yesteryear's gear, but even the idiosyncrasies of the internal wiring. So, for example, circuit crosstalk is modelled at the preamp stage.

This rather nifty section is applied in real time, and can be bypassed or applied to any sample individually and non-destructively, so you can always opt to change the quality or character later in the game.

Likewise, the Sample Rate control enables the user to determine just how lo-fi they want things to sound, and the Analog knob (found in the Setup panel) offers a sliding scale of effects, taking the sound from solid and consistent to characteristic of all-out wavering circuitry.

It's not all nostalgia-fuelled perfection, though. One thing nobody really misses about old samplers is the cumbersome editing process that most vintage units saddled you with, and as streamlined as Morgana might be compared to those boxes, the confines of the hardware-aping interface make it feel a little cramped compared to most modern soft samplers.

Compatibility with the main popular sampler formats is absent, which is a disappointment, as this would have enabled users to load up existing patches in formats like Kontakt and EXS, but with a slightly grittier sound.

Meanwhile, the supplied patches are a bit of a letdown. While we'd be the first to encourage making your own samples, it is nice to have some tasty sounds at your fingertips, particularly when you're in the throes of creativity Morgana does support REX files, though, featuring a Slice button to map them across keyzones.

Finally, although there are a number of automatable controls, not everything is quite as accessible as we'd like. In version 2, we hope to see just about everything controllable by automation, though the first priority in any update should be the facility to manipulate the sample start, end and loop points.

Morgana imbues samples with a sonic character that will be unlike anything else in your mix, helping them to stand out. Perhaps you could achieve something similar using a bit-crushing plug-in, but nothing else quite emulates the lo-fi effect that old circuitry had in precisely the same way.

Using Morgana immediately brings back happy memories of sampling 'back in the day' in much the same way as the first really decent modelling soft synths - such as GForce's Oddity - recalled the notoriously flaky analogue circuitry that initially powered most vintage synthesisers.

Morgana might not be the last word in sampling technology - it's not intended to be - but it's certainly a very valuable and desirable homage to the best that old-school sampling had to offer.

Check out the character of Morgana's sound in these audio clips:

Normalising to create a hotter signal: