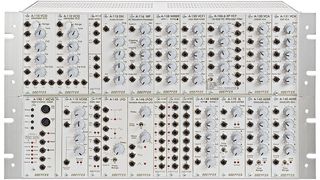 The Doepfer A-100 heralded the dawn of Eurorack system

Modular synthesizers have been around for 50 years now, and there's no denying that they're more popular than ever. Yet for a couple of decades they were considered to be a dead technology, fraught with limitations. Too cumbersome to haul on stage and too esoteric, modular systems simply couldn't thrive in a market full of sample-based all-in-one 'workstations'.

But one modular-minded German had other ideas. His name was Dieter Doepfer, and he'd been banging out cool synthesis products since 1979, when he released a phaser module for the then-popular Formant modular system. By the mid 90s, he'd released Doepfer's MAQ16/3 sequencer (co-designed by Kraftwerk) along with a host of keyboards, pedals and other items. An interesting line-up to be sure, but it was 1995's A-100 that made the Doepfer name.

The A-100 was - well, is - a full modular synthesis system in a 19" rack-mountable enclosure, and you could buy a preconfigured system or build one of your own from a handful of available modules. It was met with interest and received good reviews, though no one could have guessed that they were witnessing the (re)birth of a phenomenon.

Flash forward to the present, and with hundreds of modules now available, the once-boutique A-100 and the 'Eurorack' format it spawned have now become positively trendy. A modular synth is the instrument to be seen with, and they've become popular with big-name electronic acts, fashion-conscious DJs and hobbyists alike. One of Doepfer's most important contributions is that of economy. The A-100 is physically small, using 1/8" jacks and diminutive panel hardware, allowing lots of features to fit into a small space. Eurorack modules are often less expensive than their Moog or Buchla-styled counterparts, likely a contributing factor to the format's popularity.

There's something undeniably 'punk' about an A-100-based system. Though Doepfer's own modules sport classy, austere designs, many third-party manufacturers offer imaginative, eye-catching panel graphics. This indie ethos can be seen in the proliferation of DIY projects for expanding one's system. The Eurorack user now has hundreds of modules from which to choose, and a thriving secondhand market on which to unload those that don't fit the bill.

Because every system is unique, there's no way to accurately describe how a Eurorack synthesizer actually sounds, but Doepfer's own modules offer classic analogue circuitry and are built to an exacting standard. Though many modular users shun the tonal, tuneful approach, Doepfer's oscillators are perfectly capable of maintaining pitch stability.

Once upon a time, modular synthesisers were a mystery, explored and understood by very few. Now, thanks in no small part to the diligence of those like Dieter Doepfer, they're sold in major retail chain stores worldwide.

For those who want to get the same sort of system in virtual form, there are software alternatives. Software musicians have been enjoying modular synthesis since long before this latest revival, with an ever-expanding list of virtual options to choose from, including those listed below.

Reaktor has only recently been given a once-over that includes 'Blocks', a building-block approach to combining preconfigured, purpose-built modules, clearly influenced by the Eurorack format. Within hours of Reaktor 6's release, users were already creating and trading Blocks designed to emulate their favourite Eurorack modules.

Ableton Live users should check out this fully outfitted modular synthesis system with over 100 modules that can be quickly and easily patched together with virtual cables. Oscillators, filters, modulators, amplifiers, sequencers, processors - you name it, Oscillot has it all and more. There's a free Lite version (pictured) to get you started.

This cross-platform VST/AU modular offers analogue-style oscillators, filters, envelopes and LFOs, plus goodies like samplers, sequencers and additive waveform generation. It's an excellent way to get your head around modular synthesis.