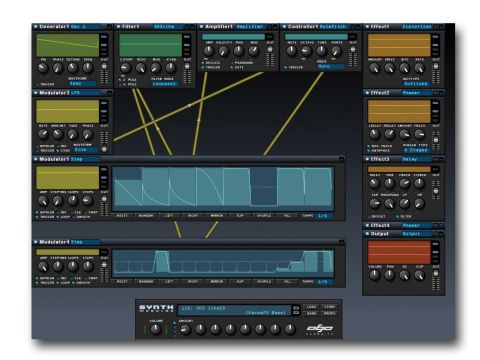 KarmaFX Synth Modular is a great buy, especially for synth fiends who are in danger of outgrowing their current instruments.

Until recently, the beta version of Synth Modular was given away free on Karma FX's website. Now the company has brought its magnum opus up to v1 with this fully-fledged commercial product.

Notably, it's still more affordable than most of its contemporaries, such as Helix, Sylenth1 and Massive. And, unlike those instruments, it's truly modular, too.

Using the supplied synth building blocks, you can create your own unique virtual synth setups, free from the limitations of a fixed architecture. Want to use another filter? Fancy adding a few more oscillators? With Synth Modular, it's all possible with a few mouse clicks.

If you're a preset-lover, there are plenty of supplied patches to get your teeth into, which make for fine starting points for your own creations, though we imagine that most synth heads will want to create their own setups from scratch.

Making a new instrument is easy - simply right-click the synth's interface and select the New Patch menu. You're then given the choice of a completely initialised patch or several basic setups that save you the trouble of putting together the first few fundamental modules.

The simplest functional synth can be created with three modules: a Generator, an Amplifier and a Controller. Each basic type of module can be set to various modes that change how it works, and Filter, Effect and Modulator modules are also available for creating more advanced and functional patches.

Osc1 is a simple analogue-style oscillator with a choice of sine, square, triangle, saw and ramp (ie, inverse saw) wave shapes. Pulse Width, Phase, Detune and Freq (aka coarse-tuning) controls are available, and like most of the instrument's knobs, these parameters can be modulated using modules such as LFOs and envelopes. It's also possible to reset the phase during note-on events.

Osc2 is more comprehensive, with the ability to mix between two waveforms, each of which can be detuned separately, and it also boasts hard sync and ring modulation features.

The Sampler mode enables you to load up multiple samples, and both the sample selection and position parameters can be modulated - a neat touch. It can sync audio to the host's tempo and also has a Delta knob for controlling the pitch and tempo of the audio simultaneously, a little like scratching a record.

The Additive mode enables the user to draw their own sounds using three modes: waveform, magnitude and phase. This is potentially extremely powerful, as it gives you a great degree of control over the frequencies created by the generator.

Pad mode works much like Additive mode but includes the ability to edit a so-called harmonic profile that applies a random factor to the phase of frequencies, creating a slowly evolving waveform.

The Noise mode offers white, pink and even brown noise generators, all of which have low- and high-pass filtering built in.

Finally, the Generator module's Input mode facilitates the processing of audio from an external source. It's ideal when you want to use the plug-in as an effect rather than an instrument.

Of course, these various sound generators wouldn't be much fun without ways to sculpt their output, and that's where the Filter, Controller, Effect and Modulator modules come into play.

There are too many of these modes for us to cover them all, but with eleven filter types, FM abilities, unison detune and sophisticated envelopes and sequencers, there's plenty for even the most devious of sound designers to explore.

The main problem we encountered with KarmaFX Synth Modular is the CPU time demanded when playing some of the more complex patches such as pads - turning up the polyphony on some of the presets and playing big chords was simply too much for our Intel Core 2 Duo 6400-based test machine.

Tellingly, many of the pads have their default number of voices set to 2 or 3.

Hopefully the situation will improve with future versions, because being able to run multiple instances of Synth Modular with decent amounts of polyphony would be quite something.

Still, some compromise is always expected when dealing with modular beasts like this, and fixed-architecture synths and effects will always have the edge since they're inherently easier to optimise.

However, as long as you're willing to be sensible and keep an eye on CPU consumption, Synth Modular is a highly useful instrument, not to mention a rather stonking sound-design tool. The large number of available module modes gives it a great deal of flexibility, combining the best of virtual synths and samplers into a package that remains fun and easy to use.

It sounds great, too, and with such a reasonable price tag, we suggest you check out the demo as soon as possible.

Listen to three sounds that were created with Synth Modular: