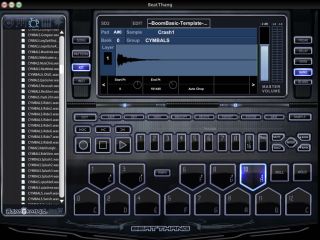 Beat Thang Virtual: the newest beat machine on the block.

Beat Kangz has turned up at the Summer NAMM show, which starts today, with Beat Thang Virtual.

The interface of this new software app screams 'virtual beatbox', as do the specs, which are as follows:

- One octave pad layout with eight banks so you can bang out beats or play the keys
- 16 tracks so you can create patterns that can be performed and remixed on the fly
- 16 layers of velocity sensitivity for emotive performance- High Quality Sampler & waveform editing. Sample your own sounds using your computer's built in mic or line input
- Edit sample start and end times. Process samples using features like normalize, reverse and resample
- Easy to use Realtime Sequencer. Create patterns in real time using quantize, swing, individual bar lengths, tap tempo then string them together in SONG mode
- Mixer with built in FX Change track, pad and pan levels
- Add 24-bit reverb, delay, flange, phaser, pitch shift, old record and many more
- Add BANG with onboard mastering
- Export your songs as .wav files or save them to your Beat Kangz Playa Thang equipped iPhone or iPod touch

Beat Thang Virtual is being released as the Mac- and PC- based companion to the Beat Thang hardware groovebox's that set to start shipping in October. It costs £149, but anyone who buys it will get a money-off coupon for the same amount that can be redeemed if they then choose to purchase said hardware.

Beat Thang Virtual can be ordered now on the Beat Kangz website.