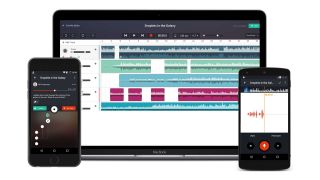 Bandlab, a free in-the-cloud collaboration platform, has announced a slew of new features and Android-specific enhancements.

To learn more about new Android mix options, a tweaked discovery structure and - most significantly - an all-new web MIDI editing facility, read on.

In the coming weeks, BandLab will release other new features, including a more helpful way to discover categories of music on iOS and Android, and a new Web MIDI Editor. All these updates will be available by downloading and signing up for BandLab (for free) on iOS, Android and Web.

When Android users click the Pro Mode button on their BandLab recording screen, a 12-track Mix Editor now opens. Android users can now further explore their creativity by importing audio and adding vocals, instruments and ambient sounds to take their music to the next level—wherever they are. Having 12 tracks also makes it easier for other BandLab users around the world to add their own ideas to tracks and collaborate on songs.

THE NEW EXPLORE ON ANDROID AND iOS

There are also changes to the way Android and iOS users can explore and get inspiration from BandLab. User content is now sorted by categories, making it even easier for musicians and fans to find the kind of music they like, as well as new collaboration opportunities with other artists.

BandLab's new MIDI Editor turns every note played into a square on a musical grid. These squares can then be placed correctly on the timeline—either manually or using BandLab's automated quantization tool. The notes can also be deleted, moved, stretched or have their velocity increased or decreased to change their sound. Once the notes are in place, users can also change them to a different MIDI sound bank (like changing a piano part to drums or guitar), providing even greater musical possibilities.

The BandLab MIDI editor will automatically detect when a MIDI device like a keyboard or a pad controller is connected. Users can also play the onboard instruments to create MIDI music directly from the desktop.

"These are all major updates for BandLab, and we're very excited to be releasing them all in the same month," said Meng Ru Kuok, BandLab's CEO and Co-founder. "Together, the Android Pro Mix Editor and the web-based MIDI Editor (in addition to our existing cloud storage) make BandLab the first truly cross-platform, multi-track DAW. So now musicians can express their creativity and collaborate on songs—wherever they are. While the new Explore page on iOS and Android will make it even easier for musicians to find the music they love, the inspiration they're looking for and new opportunities to collaborate."

The BandLab Android Pro Mix Editor officially launches worldwide today, with the MIDI Editor and the new Explore feature for iOS and Android coming soon. Musicians, bands and fans can sign up for FREE at bandlab.com or download the FREE BandLab mobile app from iTunes or Google Play.