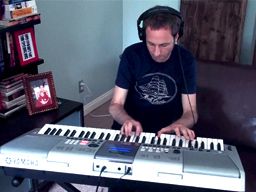 We know that times are hard and bands are seeking to trim down their production costs, but The 88 have taken things to the extreme by recording an entire song on an iPhone.

Thanks to Sonoma WireWorks' FourTrack and its recently-acquired bounce feature, the band was able to record a total of 14 different parts for new song Love Is The Thing, including live drums, guitars, bass, piano and backing vocals.

Writing about the project on The 88's website, keyboard player Adam Merrin explains: "This Spring, we were on tour opening up for the B-52s, with shows all around the East Coast. One day while we were driving, Keith [Slettedahl, singer/guitarist] was browsing through the applications on the iPhone and came across FourTrack.

"We thought this app would be a great way to record song ideas while we are away from home. So we downloaded it, and I thought it would be a neat experiment to record the full band on a phone. I was very curious to see how it would sound."

Presumably, the band were happy with the results, as they've released Love Is The Thing, via the iTunes Music Store. What isn't clear, though, is what (if any) further mixing/processing work was done once the recorded tracks had been transferred back to a computer.

Still, the feat of actually recording the song is impressive - you can see how The 88 did it in the video below.