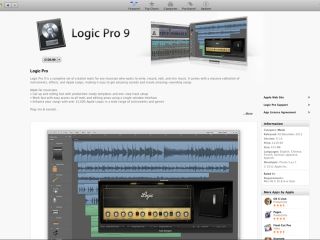 And here it is: Logic Pro 9 on the Mac App Store.

It's not Logic Pro X, but as expected, Apple has moved its current flagship DAW Logic Pro 9 to the Mac App Store. What's more, it's priced it very aggressively at just £139.99.

We're still waiting for Apple's UK website to be updated, but it appears that this spells the end for the boxed Logic Studio bundle and Logic Express 9. It just doesn't make sense to have a cutdown product when the full version of Logic is now so affordable.

However, it's worth noting that MainStage, Logic Studio's 'live' application, lives on on the App Store, and at £20.99, it's something of a bargain.

The Mac App Store version of Logic Pro 9 doesn't look to contain anything new: it's a 413MB download, and up to 19GB of content can be obtained as an in-app download.

However, its presence puts to bed the rumour that Apple was thinking of dropping plug-in support once Logic became an online-only purchase - this remains firmly in place.

GarageBand, Apple's entry-level DAW, has been available on the Mac App Store since January and is priced at £8.99.