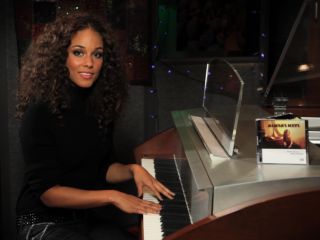 Alicia Keys: get her tone in your DAW.

The samples for this 17GB Kontakt Player instrument (it can also be loaded into Kontakt 4) were recorded at Keys' Oven Studios over a period of two years, resulting in a piano that offers 12 discrete velocity layers per note and emulates key release, sustain pedal functionality and sympathetic resonance. A convolution reverb is also included.

"I love this software so much that I used it on my entire new album," says Alicia Keys. "Not once did I record a live piano because there was just no need. I plan to tour with this sound and use it all around the world. I love how it gives those who may not be able to buy an acoustic piano a true piano experience."

The capture of Keys as an endorsee/collaborator is certainly a coup for Native Instruments, and has given it the opportunity to come up with a product name that's also as pure a pun as you're ever likely to see.