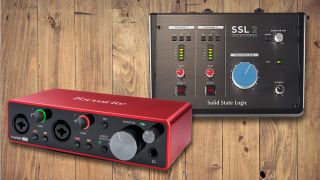 Things have come an incredibly long way in the audio interface market since the early days of computer-based music production, when gaming soundcards by Creative Labs, Turtle Beach et al were the only options for getting anything approaching high-quality audio into and out of your PC (the Mac had its own onboard consumer-level system).

Today, just a couple of hundred pounds/dollars will get you a two-in/two-out professional interface packing everything you need to make pristine recordings on your Mac, PC or iPad, and two of the most compelling current options in that price category are Solid State Logic’s SSL 2, claiming to bring you some degree of the sound of the company’s legendary 4000 Series consoles; and Focusrite’s Scarlett 2i2 3rd Gen, channeling the spirit of their equally revered ISA preamp. The two are very similar in their specs and features, but let’s figure out which one’s best…

Connection and bus powering of the SSL 2 and Scarlett 2i2 3rd Gen is done over USB-C, and both are equipped with two mic/line inputs and two line outputs, plus a headphone jack. All inputs are on combi XLR/quarter-inch jacks – with switching between line and instrument-level signals, and +48V phantom power – and outputs are on balanced quarter-inch jacks (two for the line outs, one stereo out for the headphones). It’s worth noting that neither interface includes any form of MIDI I/O, so using them to connect your DAW to external synths and other MIDI hardware isn’t an option.

Both enclosures are all-metal and positively tank-like in their construction, but very different in design. The SSL 2 has a wedge-shaped casing with controls housed on the sloping top fascia and all connections made around the back, while the 2i2 3d Gen is an oblong box with controls, inputs and headphone output on the front, and line outputs at the back.

The units share the same input gain and output (line and headphones) volume knobs, but the SSL 2 is also blessed with a convenient Monitor Mix control (see below). Although the footprint of the SSL 2 (234 x 157mm) is considerably larger than that of the 2i2 3rd Gen (175 x 98.8mm), the two distinct formats each have their own usability benefits, which we’ll get to shortly.

Cosmetically, we’d suggest that the 2i2 3rd Gen is the sexier of the pair, with its cleaner lines and futuristic LED knob collars, but the SSL 2’s visual referencing of its big-console heritage certainly doesn’t go unnoticed.

Driver-wise, both units are class-compliant under macOS and require installation of an ASIO/WDM driver in Windows. The SSL 2’s sample rate and buffer size are governed by the host DAW, but to use the 2i2 3rd Gen at sample rates above 48kHz, the Focusrite Control software has to be installed. With Focusrite’s bigger multi-channel interfaces, said app handles routing and mixing of inputs and outputs, but here it offers no real benefits beyond enabling those high sample rates and monitor mixing.

Central to the appeal of both boxes is their ability to introduce the super classy preamp and console circuitry colouration with which the two manufacturers made their respective marks on the recording industry. Pressing the SSL 2’s Legacy 4K button switches in an “analogue enhancement circuit inspired by the character of” the SSL 4000 Series console – specifically, a high-frequency EQ boost and harmonic distortion that works particularly well on guitars, drums and vocals. The 2i2 3rd Gen pulls off the same sort of trick with its ‘Air’ circuit, which successfully emulates the luxurious high-frequency sheen of Focusrite’s fabulous ISA preamp.

Beyond fundamental specs and historical pedigrees, the Air and Legacy 4K circuits are undoubtedly the headline features of the two interfaces, but another point of differentiation is the metering. The SSL 2’s traditional five-stage ladder-style meters give a more literal impression of signal levels than the ’Gain Halo’ collars of the 2i2 3rd Gen’s gain knobs, which represent increasingly hot signal levels through green/orange/red LED colouring. Both are equally effective in use, and if you need more details with the 2i2 3rd Gen, Focusrite Control provides good on-screen metering.

Finally, both interfaces bundle in a decent wodge of plugins and cut-down DAWs, arguably the most ‘valuable’ being Vocalstrip 2 and Drumstrip with the SSL 2, and Focusrite’s Red Plug-in Suite and Softube’s Time and Tone Bundle with the 2i2 3rd Gen.

When it comes to comparing the workflow and ergonomics of our two home studio contenders, there’s not much in it – both are perfectly straightforward in their connectivity, gain adjustment and output levelling. As mentioned above, the SSL 2 is markedly bigger than the 2i2 3rd Gen, which has a bit more of a ‘sling-it-in-your-laptop-bag’ feel; but we do prefer the SSL 2’s angled console-style control arrangement for desktop usage. Back in Focusrite’s court, the 2i2 3rd Gen’s front-mounted input and headphone sockets are a definite plus, making it easier to get to those frequently-accessed holes than you can their rear-located SSL 2 equivalents.

Direct monitoring is better catered to by the SSL 2, which facilitates blending of the line/instrument input with the USB input from your DAW via the Monitor Mix knob. The 2i2 3rd Gen supports direct monitoring, of course, but balancing it with the signal from the DAW can only be done in Focusrite Control.

In terms of sound and latency, the SSL 2 and 2i2 3rd Gen are superb performers, with exceptional dynamic range, plenty of volume when you need it, and unnoticeable latency at small buffer sizes. Those are the most important considerations in any audio interface, and it’s truly amazing what you get for your money in both cases here. The decision that needs to be made, then, is between the (entirely optional) subtly infused saturation of the SSL’s 4K Legacy mode and the slightly more apparent top-end lift of the 2i2 3rd Gen’s Air circuit – for us, the latter just edges it, but it’s really a matter of taste.

In conclusion, the SSL 2 and 2i2 3rd Gen both serve up stellar performance and exemplary ease of use, and you honestly won’t go wrong with either of them. If we have to pick one over the other, though – which, given the objective of this feature, we clearly do – we’d plump for Focusrite’s package, swayed by its fabulous Air circuit, smaller size, lower weight, and handy front-panel connections.